Military life can be profoundly rewarding and deeply traumatizing. For Black women, “veterans, sisterhood, comradery, and trust” are what they can expect to find when joining organizations like the National Association of Black Military Women, says President-elect of the national organization Dr. Annette Tucker Osborne.

The life stories of Black women are often untold or forgotten, and warrior women like Dr. Tucker Osborne and the President of National Women Veterans United are leading the way to ensure the needs and priorities of Black women veterans of all ages are met.

“Many Black women left disinvested communities and went into the military and now have returned to that community with mental health issues and disabilities and are less likely to heal or thrive,” shared Crump.

What Crump and Osborne have in common is a passion for lifting up others. Health disparities aren’t the only issues of concern; employment, housing, and quality of life after the military can be challenging. A released HUD statistic shared that 33% of sheltered veterans are Black and similar findings by the Department of Veterans Affairs showed Black veterans are twice as likely to live in poverty and not use VA benefits compared to white veterans.

NABWV is passionate about the next generation of members and staying connected to serve across the nation; their mission is “To seek out, record, maintain and tell the history and heritage of African-American Military Women who served and are serving in the United States  Armed Forces shared Latia Suttle CW2 (Ret), USA and current Public Relations Officer of NABMW.

Even though Black women served during the American Revolution, World War One, World War Two, and the Korean Wars, Suttle lifted up that there is no media, no documentaries or displays to share the legacies of these brave ladies.

Among the unsung sheroes that are now getting their shine is the 6888th Central Postal Directory Battalion, of which some of those ladies deployed overseas were once living members of NABMW.

Nicknamed “Six Triple Eight,” this all-Black woman battalion was sent by the U.S. Army to England and France in 1945 to clear and direct thousands of pieces of backlogged mail. Faced with the realities of war coupled with the state of race relations, these women experienced sexism and racism while still serving with honor and distinction and completed their mission in six months, processing 17 million pieces of mail.

As Suttle and Osborne share their connections with these women, one can’t help but to be curious about all of the other stories and her stories that are waiting to be remembered, told, and commemorated. The Six Triple Eight Documentary Facebook page has 2.5K followers and growing. The film is a testament that the presence of Black women veterans in our lives and communities is valuable but more inspiring for civilians and younger veterans.

NABMW and NWVU are working to increase services and resources for their respective memberships.

“We currently have five chapters in the organization, with two starting up in Chicago and another in Texas,” said Latia Suttle. 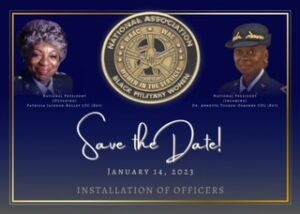 The Chicago Chapter can expect a visit from Osborne as she prepares to be installed as the President serving two terms beginning in 2023. Led by  President of the Chicago Chapter of NABMW Arlene Duncan, United States Marine Corps 1987-1994, the chapter will have 14 founding members and be installed in February of 2023. Duncan wishes to focus resources for women that have experienced military sexual trauma, employment resources, and services that assist with transitioning back to life outside of the military.

“All women can experience trauma,” said Suttle, “military women can deploy to combat zones in addition to all the other things women have to face, then the transition from military to civilian life is another challenge.”

Despite the challenges experienced by Black women veterans, this sisterhood can be a lifesaver.

“Younger veterans must participate in organizations like ours so that they know that we are here to support them and can connect them to their VA benefits, services, and community resources,” shared Crump.

With the aging population of founding members, it is important to be present and engage, connect and share stories. Black women veterans are still women’s issues, and we as a community should be proud and grateful for their service and sacrifice.

Our sheroes are among us; they are our sisters, aunts, mothers, and neighbors–they are entrepreneurs, advocates and educators, nurses, doctors and authors, and even elected officials. As more Black women transition from active duty, our communities must not only be ready with gratitude but with intentional resources to serve them as bravely as they have served our nation.