A New Trail for Bronzeville Community

On Saturday, April 23, 2022, friends, supporters and Board Members gathered at 41st and Drexel to celebrate Trails Day with the Bronzeville Trails Task Force (BTTF). No day was more fitting for this celebration. The weather was beautiful, and what a better way for the Bronzeville Community to celebrate Trails Day. Commemorated on the fourth Saturday of April, Trails Day encourages the nation to get out and enjoy the country’s outstanding trail system. The celebration began with community clean up on 41st and Drexel and was followed by a walk from 41st and Drexel to 41st and Lake Park where a press conference was held.
The press conference was attended by Bronzeville Trail Task Force members, local politicians, supporters of the BTTF and community residents. Aldermen Pat Dowell (3rd Ward) and Sophia King (4th Ward) both provided remarks in support of the Proposed Bronzeville Trail. Alderman Dowell stated that, “This project will be a ‘bottom-up and not a top-down’ project.” Dowell also took at moment to declare that “There is nothing too big for Bronzeville.” Alderman King, who attended via video, echoed her support of the project while also highlighting some of the historical facts about the current embankment.

The Bronzeville Trail Task Force is comprised of a 20-member volunteer board created in 2020. The goal of the Board is to communicate on matters related to the Bonzeville Trail. The Board, according to their Facebook page, also serves to advocate for, facilitate and support opportunities for direct community engagement; to ensure a healthy balance between the Bronzeville Trail as a neighborhood amenity and a regional and international attraction; to investigate and preserve the history and the life of the community and to assist in raising funds and securing resources. The board will also be responsible for applying for an application at the Chicago Park District to become the official park advisory council for the Bronzeville Trail. 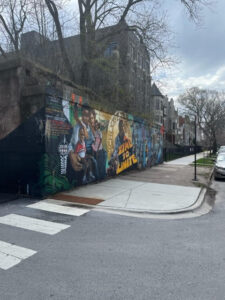 The Bronzeville Tail Task Force seeks to provide a trail for walking, running, and biking bringing vitality and life to the Bronzeville community while at the same time providing residents and visitors direct access to the lakefront by connecting to the existing 41st Street pedestrian bridge. The new Bronzeville Trail project is set to occupy the space formerly known as the Kenwood ‘L’. The plan is to start the trail at 40th and Dearborn on the west heading east for 2 miles to end at 41st and Lake Park on the east. The Kenwood ‘L’ was part of a 6-stop elevated train station. Originally named the Stockyard Line, the 1.25-mile line operated from 1907-1957 and ran from 40th and Indiana to 42nd and Oakenwald. The remaining embankment is currently owned by the Cook County Land Bank. 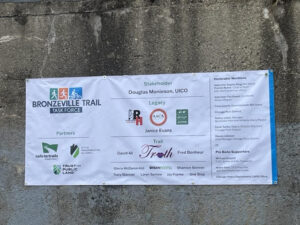 The Task Force has been actively applying for grants to offset what is proposed to be a $100 million dollar project. The grants will also defray expenses that the Board has been absorbing since its inception. To that end, the Board was recently awarded a $75,000 grant from Chicago Community Trust. Similar trail projects, like the Northside 606 trail, take up to ten years for completion. While only in year two of the Bronzeville Trail project, the Board has set the aggressive pace to complete the Bronzeville Trail project in 7-8 years. The press conference and community event were the first of what the Board promises to be many events on the road to completing this new addition to the Bronzeville Community.