The Silver Room Goes Home For The Holidays

The Silver Room is back in Wicker Park . . . for one month only!

The holidays are nostalgic, especially for Chicago native Eric Williams who opened his third annual Silver Room pop-up store on Milwaukee Avenue to pay homage to his previous location, which operated for 18 years in Wicker Park.

He has taken an empty commercial space and transformed it into a “gathering space,” complete with a DJ booth, and stocked with artwork, gift items, and unique handcrafted jewelry.

When Williams originally opened The Silver Room, he envisioned a space that would transcend retail.

A dyed-in-the-wool Chicagoan, Williams attended UIC where he pursued a degree in finance. “I was working at Taco Bell, making$3.35 an hour, and I met someone who suggested that I become a street peddler.” He gave it serious consideration. The UIC campus is close to Maxwell Street, which, in the 80s, was a bustling concoction of bargains, food, street musicians and diversity. He liked the hustle and worked his way through college selling t-shirts and socks.

After graduation, Williams pursued a career in his field. “I was a stockbroker for a year. I hated it.”

He quit and returned to sell his wares on the streets. He took his show on the road – traveling around the country to various jazz festivals, and Caribana in Toronto. He had creative inspiration and started making his own t-shirts. In 1995, he began selling them at Lit-X, a retail outlet in Wicker Park, located on the busy corner of North, Damen, and Milwaukee.

Lit-X was an inspiration for Williams. “It was a place where people would visit. I had been DJing for years, so I brought my turntables into the store. DJs would come in, and we would spin and talk about music. People would linger and buy things. Artists would ask to hang art on the walls, and other friends wanted to come in and teach classes. It was a multi-purpose space.”

On a serendipitous trip to New Orleans, Williams was selling his products at a festival and met fellow vendors – two women from Africa who had no lodging. Although Williams himself was sleeping in a van with two other people, he invited them to stay. Grateful, the women offered him a lead on wholesale silver jewelry in New York.

He had never thought about selling jewelry, but he tested the concept in Lit-X, and it sold. He sold more on the street, and silver was soon his best seller. Focused on the success of his jewelry sales, Williams opened his own retail location in 1997. His father owned the BlueRoom, a nightlife establishment in the south suburbs of Chicago, so Williams thought it fitting that his store should be titled The Silver Room.

Three years ago, The Silver Room relocated to Hyde Park. His Milwaukee avenue lease was ending, and Williams had become frustrated with the change in a formerly diverse eclectic neighborhood. “It wasn’t fun anymore.” 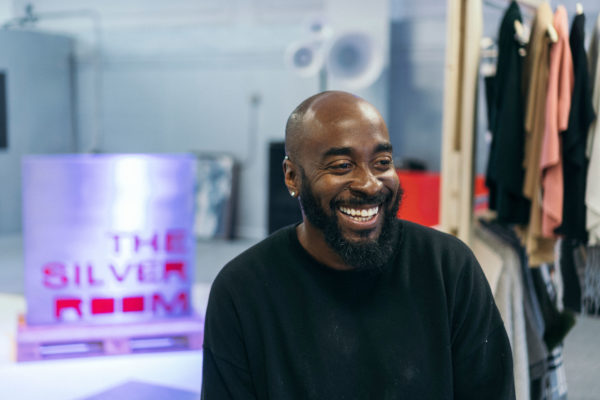 When the University of Chicago invited him to Hyde Park, he originally thought of opening a second location but decided to focus on one store in a new neighborhood. “It was the best move I could have made,” Williams says. “It’s fun, people are friendly and I love the community.”

Eric Williams is a Bronzeville resident and a fixture in the community. 21 years after the debut of The Silver Room, Williams’ original idea is a successful reality. He’s been able to make strides in the community, and recently completed a Harvard University fellowship on the subject of urban planning through culture.

Williams has made many friends over the years who enjoy dropping into The Silver Room to see him – to the point where he created a t-shirt that reads “I know Eric” – the most widely used phrase among store visitors. Although the store has moved to the south side, he likes to revisit Wicker Park to reconnect with other customers who have fond memories of his original location. Holiday shoppers are welcome, along with members of the Silver Room community, who want to visit, listen to music and reminisce.

The Silver Room pop-up store is located at 1302N. Milwaukee and open until December 31st. Hours: 11-8 from Monday through Saturday, 11 – 6 on Sunday. For more information, visit thesilverroom.com.