Nearly a decade ago, one of the breakout songs of the cuffing season was “Birthday Sex,”—a song by Chicago artist and songwriter Jeremih. Not since the early 1990s have we heard songs from another Chicago R&B singer in a similar fashion that captured the audience in this way.

In 2009, a new era of young artists was paving the way, with Jeremih as the poster child. As parents ran to cover their children’s ears and grandparents clutched their pearls, Jeremih’s breakout song was just a glimmer into his ability to capture younger listeners across the city, and with a newly signed deal with Def Jam Music Group—he crossed over nationwide. Several complete projects and multiple collaborations later, including albums, Jeremih; All About You; mixtape, Late Nights with Jeremih; Late Night: The Album; MihTy, and a plethora of hits—Jeremih was in demand as both a singer and songwriter.

As a student, Jeremy Felton was a member of Morgan Park High School’s marching band, and by his junior year, his skills as a musician earned him a spot in the Latin Jazz band. Later he would go on to attend Columbia College in pursuit of a music career. His musical partnership with producer Mick Schultz would transform Jeremy into Jeremih—jump-starting a successful career featuring collaborations with 50 Cent, Future, Twista, YG, Ty Dolla, Chance the Rapper, DJ Khaled, Lil Wayne, and many others.

“I live by what I practiced especially being a brand for the last decade. This past week, I reconnected with my original partner, Mick Schultz. I’ve been at his house in Tanzania (California), away from all my distractions at my crib. For the past week, we have been in the studio,” he says. “It gave me some peace, more than I thought it was going to give me. I’m not out here just waking up and doing nothing; my job is to find a job.” 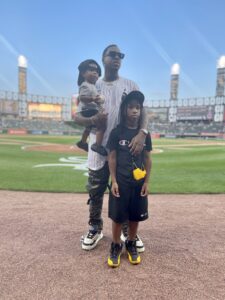 The father of two, Jeremih, made the headlines during the pandemic, contracting COVID-19 where he ended up in the hospital on a ventilator for several days. His story kicked in the reality of the virus and how close he came to becoming another statistic. However, he was grateful for a full recovery and the support of loved ones and friends.

The 35-year-old reflects, “Luckily, I have people from family, my mom, and other accolades in my life. Everyone is well taken care of; I feel I know what time it is.”

One day, he received a call from his friend, Curtis ’50 Cent’ Jackson, who was working on the production for his fourth installment of the Power series—Power Book IV: Force.

Based in Chicago, the series would reflect the storyline around fellow Chicagoan Joseph Sikora’s character, Tommy but needed to have an authentic feel for the city.

Jeremih would end up not only producing the theme song but taking on an acting role in season one.

“When 50 Cent hit me about doing the theme song, I knew the vibe, so we sent it back and forth to each other within a day. Of course, I’d rather be behind the scenes than in front, but I wasn’t mad this time to be in front of the camera,” he says. He said the experience opened future possibilities beyond the recording studio.

“I never dreamed I would be on the main screen. 50 Cent brought a lot of opportunities for my role, hopefully the first of many roles. But, working with Joe, it was a different type of situation.”

This summer, the Southside native will branch out on a new role as the Grand Marshal for the 93rd annual Bud Billiken Parade. The legendary parade is the country’s longest-running and largest African American parade in the country. It has a rich history of showcasing youth, celebrities, athletes, and public dignitaries from the Black community. Jeremih will share the honor with past Grand Marshals—Muhammad Ali, Diana Ross, The Supremes, James Brown, then-Senator Barack Obama, Deon Cole, Vic Mensa, Chance the Rapper, Lil Rel, and WNBA and Olympian Candance Parker. 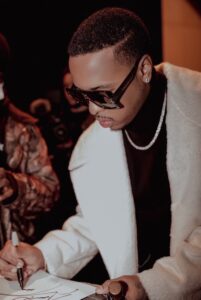 “When I was in the Morgan Park High School marching band and with the Jackie Robinson club, I remember participating in the parade. Honestly, I didn’t know the importance of the position, but I know Chance was in the parade, which got me thinking about it more,” he says excitedly. “I almost want to go back to Morgan Park High School and gather up my old homies and even the present marching band to make a debut.”

“I’m about 87 to 90 percent done. This project would be my last project with Def Jam as far as contractually during the ten years on the label. I feel strong right now about it. If you like me—I can make you love me again.” Jeremih mentions he is open to all possibilities, whether staying with a major label or pursuing an independent path like his buddy Chance the Rapper. But for now, he is focused on completing his project and working with two artists, Murf—a native from the Westside of Chicago and Australian Larissa Lambert, signed to his production company.

“When I first started, I was at school at Columbia College—I was halfway through a semester. When “Birthday Sex” came out, I had no chance to finish school, and many things were going on. I was a baby thrown in shark waters. Fortunately, after all these years, I know what time it is. I know how to speak for myself. I feel it’s more than me. I’m here to be who I am, and it’s nothing like having fun from it.”