For the past five years, along 53rd Street in downtown Hyde Park, there has been a growth spurt of new retail businesses along with the older ones such as community staples–Mellow Yellow, Valois, and Pizza Capri. Blending in among some familiar storefronts are unique specialty boutiques and fresh eateries who may have considered settling North of Roosevelt instead of the Southside.

Jojayden Handmade has made tremendous strides in bringing their unique sensibility and style in men’s fashion to Hyde Park. Founder and entrepreneur, Wale Nubi is a native of Lagos, Nigeria, who has always had an affinity for fashion since he was a young schoolboy. He and his five siblings were raised to work hard and to have an education, which led him into one of the Fortune 500 companies in the IT division. 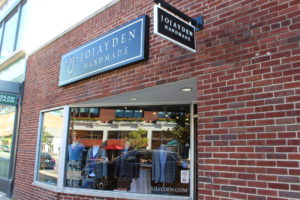 His love for fashion turned into a side hustle and eventually a full-time business. He began to build a name for himself for having the best high-end men’s shoes.

Nubi says, “I was selling shoes out of the back trunk of my car. People were paying good money for my shoes, and by the end of 2016, and took a leap and made it happen.”

In 2016, the University of Chicago who owns a great deal of commercial and residential property in Hyde Park, approached one of Nubi’s retail partners about additional small business recommendations to lease a storefront property.

“I was encouraged by my buddy Eric Williams, the owner of The Silver Room, who would carry my shoes in his store. One day, the University of Chicago approached Eric and asked him they wanted a shoe store in Hyde Park, who would he recommend? He said this ‘Nigerian guy whose shoes are nice.’ I met with U of C and gave them a presentation,” he says.

After meeting with them several times, Nubi won the bid to open in the space located at 1457 E. 53rd St. “There were other established retailers who wanted the space, but for some reason, they chose me. I’ve been in the space for almost three and a half years,” he says. 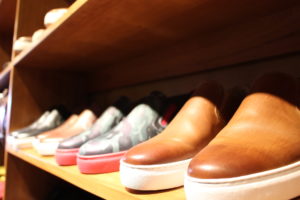 Living in the suburbs, he said he only made less than five trips to Hyde Park and had no solid client base for other items outside of men’s shoes. Since then, his specialty boutique has expanded its inventory to include ready-to-wear and custom-tailored suits, ties, collared shirts, hats, and other cool accessories with a large display of edgy cufflinks. But, what makes Jojayden’s craftsmanship stands out is the boutique’s suits.

When we look at the slimmer cut styles derived out of the 1960s, a shift in narrowing the traditional suit and raising the ankle cuffs came the United Kingdom into the African continent.

Nubi explains, “Most of the English speaking countries were colonized by the British and adjusted to that style of fashion. It’s what we knew growing up. Even French and European wardrobe have been caught on to this trend,” he says. It’s that very international touch some customers seek when they enter his store.

Before he delves into choosing a particular clothing preference for clients, he considers their tastes. “Even before I start showing fabric, we go into a conversation on what kind of suit?

Why do you want a suit? Is it for a wedding? Is it because you want to have a nice suit to have or for work? Is your body frame different, and we do customize the outfit? It can range from a dinner jacket to a tuxedo that is tailored to shape the body,” he says.

There is something for everyone, and Nubi has created an experience for shoppers seeking an individualized shopping experience and on a budget.

“We have the ready-to-wear starting from $30 to blazers priced around $200-$300. We have accessories starting at $10. We try to make it affordable for everyone. Custom suits are more money from $900 and upwards. I also style grooms getting married. I provide special packages including appearing on the day of their wedding to assist them and the groomsmen, styling them for the big day,” he said.

Since his debut nearly four years ago, the Nigerian native has graced the pages of several publications, including CS’s feature–Chicago Men On the Move. Although he’s enjoyed the recognition Nubi says in any business, there are challenges, but he is in it for the long run.

The inspiration to open Jojayden derives from combining his sons’ names. Although the boys are five and six years old, Nubi hopes they are just as interested in fashion and entrepreneurship as he was growing up. Currently, he is working on the next phase of expansion–children’s clothes.

Motivated by his youngest son’s early interest in wearing suits, Nubi says, “I’m planning to launch a father and son collection. I did some samples, and right now, I’m gathering more research. Probably sometime next year.”