Nearly ten years ago, Chicago music artist Antwone Muhammad, known by his stage name, Twone Gabz was diagnosed with breast cancer. Muhammad, a father of two, a songwriter, and a rap artist, is grateful to share his story and make many aware of men’s challenges with this disease. However, in an era that emphasizes women’s healthcare and pays tribute to breast cancer awareness in October—breast cancer should highlight men.

Black men with breast cancer typically have a lower chance of recovery.

“After the first time, I started looking at any and everything I could look at that. I felt it was something beneficial to the body that could cure or treat cancer; I was all over it. I used it as an experiment, an opportunity to be more artistic in my health.

I tried everything from water floating, acupuncture, cupping, hydro colon therapy,” Muhammad explained. “I was getting colonics twice a week and juicing. I went for two years as a raw vegan and didn’t eat cooked food. If I heard it was helpful, I wanted to try it because I want to live,” he says.

For the next four years, while in remission, Muhammad tried everything holistically, but cancer returned. 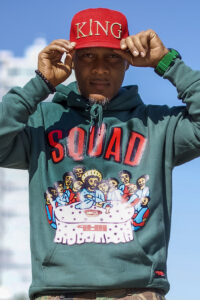 At 42, after discovering his diagnosis—he was not down and out. He explained, “In 2018, it was metastatic to the bone. At that time, I had spots in my skull, my neck, my spine, both shoulders, and both hips, spots in my lungs, an inflamed pancreas, and spots on my liver. The doctor looked at me and said, “Sir, you need to get your affairs in order.” My body was in that space.”

Muhammad said he came home and started to delve deeper immediately into various types of therapy, from adapting to a new diet and eventually going to psychotherapy. “I’m doing everything I know to do as far as the body; let me start doing more work on this mind and soul peace. That’s when I got into acupuncture, cupping, and massage.”

Dealing with the heaviness of healing his body, Muhammad discovered healing differently.

“However, it sent me on an emotional rollercoaster. It tore me down and made me a new person. It made me realize how much of my reality I had created—whether I liked it or not. I loved aspects of it, but there was some stuff, ‘Damn, I created this with my thinking.’ Some of it is self-sabotage thinking, and that’s not a comfortable place to be in as a person to admit self-sabotage. That’s tough because who wants to feel that?” he says.

His new self-discovery brought him to the stark reality of the relationships in his life. “It caused me to lose a lot of people around me because I had to step back from everything and ask myself, ‘What’s real? What did I create?’ It’s a scary place but an empowering place. It taught me we created this entire experience; we accept the blessings, but we don’t want to accept we created some of the crap in our life.”

The Power of the Mind

In understanding how to cope mentally, Muhammad could feel his body change.

My body went through a total transformation. The way that I even viewed using my body—the way I walk, how I accessed muscle tissues. Everything is different because I have a different understanding of how the body works,” he says.

“What it taught me, a lot of times as a human being, the things we process as pain—it’s not always pain. The pain is the result, and we tell the doctor we need something for the pain. Pain is the result; pain is not a cause. It taught me to go into the core of what makes the body works. It took me down some weird roads.”

Although he is physically in a much better place, Muhammad understands that cancer can return anytime. His mission is to spread his knowledge to others to achieve a healthier lifestyle. So, he started a Facebook community page, Plant Base Fresh, where members discuss and exchange resources on holistic and healing practices in their daily lives. He says it has become an excellent way for people to contact him and begin one-on-one consultations on areas such as juicing, toxic cleansing, and encouraging newbies to maintain their quality of life.

As an artist, Muhammad built strong relationships in the music industry with some of the biggest names in hip-hop. His music alias, Twone Gabz, has blazed the Chicago scene with numerous projects and beyond, having worked with heavyweights DJ Jazzy Jeff and Erick Sermon. Entering a new chapter, he has relocated to Los Angeles, where he currently works with producer and music executive, No ID and Harold Lilly as a songwriter.

He’s excited about the opportunity, “Harold asked me to write some songs for Will Smith. It was before the slapping incident, and things are picking up again now that everything has calmed down. I’m grateful for this. It’s interesting because I’ve done a lot of writing for female rappers lately. I’ve submitted songs to Cardi, Megan, and Doechii,” he says.

Muhammad is also working with his nephew, Tyree Hakim recently signed with Roc Nation and planned on releasing new music on the independent side. Another project he is close to is a short film about the creation of the Nation of Islam. As a Muslim, this venture is close and dear to his heart.

“It’s a tribute to Minister Farrakhan, and we must give him those flowers now. Doing this—right here and now, fed my spirit.”

Through the health challenges he faced, Muhammad’s determination, love for his family, faith, and creative passion never wavered. However, he needed to change the narrative as a Black man and for the hip-hop culture.

He pauses and says, “I thought my gift was to rap. That wasn’t my gift; it was just one form to utilize my gift. My gift is more impactful and simpler than that. My gift is to inspire and build with people by communicating bits and pieces of God’s energy, which He allows me to grasp on my journey. I’m so grateful; I can appreciate life, and the simplest things give me the most joy these days. I love it.”