Rahmaan Statik: The Man and the Mural

As the weather warms up and Chicagoans begin to shed layers of sweaters, scarves, gloves, and boots—we look forward to all the beautiful things the warmer climate brings. There is unique cultural beauty throughout Chicago’s neighborhoods— vibrant with historical depth through art. Since the early 1960s, a movement created by artists in the African American and eventually evolving into the Latino communities began to take shape—utilizing outdoor canvases as a visual storybook.

In the 1980’s the wave of young graffiti artists gradually rose up throughout the inner cities— tagging and making their mark on public transit property from buses to trains. In some cases, it was a mix of art related expression and gang territorial markings. However, with mounting pressure from businesses and city officials—stricter laws and resources were put in place to clean up neighborhoods with crews specifically focused on graffiti clean-up.

Nearly four decades later, graffiti is no longer a dirty word. Embrace by world-renowned museums–the art form that has become part of Hip Hop culture from the very beginning. What was kept underground and often the playground for artists fine-tuning their craft on under train viaducts and on abandoned buildings is now commissioned murals throughout various neighborhoods.

Rahmaan Statik has built a name for himself as one of the leading muralists throughout Chicago. Along with a collective of graphic artists and illustrators, which includes Max Sansing, is the co-founder of called R.K. Design. They have created close to 450 outdoor pieces over the last 24 years around the city. 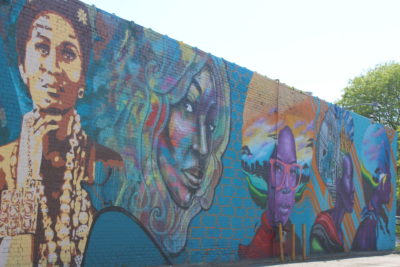 “I started as an artist, drawing comic books and cartoon characters as a kid. When I became a teenager, I got into more. The lure of graffiti and living that lifestyle was more enticing to me as a 13-year-old. I was penning walls, tagging. It was a double life I was living as a teenager,” said Statik. “In my household, I knew I would be in trouble if I were to get arrested. The maybe wouldn’t be so bad if it were graffiti. When I finally got arrested for graffiti, I got in trouble—much trouble. Once that arrest happened, that pushed me to do something permanent and legitimate and to create a better legacy such as painting murals,” he says.

Painting his first mural at 16, Statik didn’t think he would be good at it. Both he and friend Max Sansing was arrested on the same day at the same time bonding the two young boys.

“Since that arrest happened, we were both grounded. mom was pretty cool; my mom beat the shit out of me,” he laughs. “No television or nothing but I could hang out at Max’s house and draw in my sketchbook. She made that the exception.”

From the start of the first mural he says, they never looked back and had an appetite for creating visual pieces. Launching R.K. Design in 1998, “That put us on a journey to create spray paint murals which could be considered high art instead of the usual stigma of graffiti. We would do graffiti letters in a number of our older walls.

He says, “As we progressed, it grew. Doing art with spray paint and creating art. We wanted to be on thecusp of that during that time. We saw where spray paint art was going. Street art is a different form than graffiti. It’s unapologetic than graffiti.”

Growing up on the Southside, he was growing in his own and following Hip Hop back in the early to mid-1990s. He, along with a group of teenagers from the West of Dan Ryan to Eastside, we meet every Thursday at The Promontory Point. From breakdancing to ciphers; everyone who was into Hip Hop would hang out after school.

He recounts the energy during that time. “It was a whole scene that was unique in that era and a part of Chicago. Several rappers, street artists, breakdancers came through there. On the way through the tunnel to ‘The Point’ under Lake Shore Drive, we used to paint it by starting a mural program. It was my first mural that I painted, and influenced an actual program led by Brian Jones,” Statik says.

“The things he was doing was awe-inspiring. Brian took Max and me under his wings to show us how to get walls; the process of getting spray cans, and materials. My second wall was at the B2’s by Olive Harvey College, which was on the other side of the train yard. It gave us a chance to be creative.”

After graduating high school, Statik attended the American Academy of Art, where he studied in the evolution of art and visual communications. “I began to understand of what legacy I’m taking part in as an artist. What I’m doing as an artist is a reflective energy as energy evolve.”

Some of the artists who influenced Statik throughout his career include Renaissance artists such as Verrocchio, Frank Frazetta, and Alphonse Mucha. Also, American artists Jackson Pollock, Norman Rockwell, Andy Warhol, and Jean-Michel Basquiat.

Corporate brands from McDonald’s, Toyota to Red Bull have commissioned him and his team for unique mural projects. 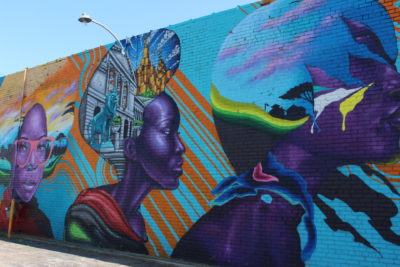 Earlier this year, the city of Chicago launched a mural registry proposed after several murals were painted over by city workers igniting a firestorm of criticism from the art community. Many of the walls are commissioned or created by community organizations to beautify the area through positive messaging and cultural identity. Murals registered will be given a mural registration I.D., and an official city emblem will on be placed on the wall at no registration cost.

As each mural is created and registered, the Department of Cultural Affairs and Special Events (DCASE) will update the registry.

Located on West side of 87th and Vincennes, The Great Wall of Chicago project is a unique mural paying homage to local elders of the Auburn Gresham community. Statik says it also addresses the mental health problem in communities across the city.

Statik says, “I try to paint murals that are in contact with the environment where people who have to live next to it and see it every day. Each piece is custom to the area and serves an essential message in that area. As of recently, I’ve been trying to do studios that create in oil paint onto a wall.

The Great Wall of Chicago is an example of the types of projects he takes on. “This was a mixture of my studio project and what the alderman wanted — it 60/40. I had 60 percent creative liberty, and the other 40 percent was led by the alderman, and the community leaders in Auburn Gresham,” he says.

Not restricted to Chicago, Statik and the team have traveled being commissioned in other cities to paint on different projects.

“We have people in Denver, Connecticut, Florida, and Los Angeles. Social media made it possible to see artists who are doing the same thing. Instead of rivaling against them, you can make the connection. I travel painting murals, and it helps to collaborate with other artists in that city. Social media makes it better. Doing art projects on the road can get expensive, and it helps to have people who live there with resources.”

Rahmaan Statik and the incredible works of Chicago premiere muralists have redefined how we view street art. Often blighted communities are transformed from depleted blocks to bursts of hope through their gifts of expression. While we’ve seen art programming in CPS schools cut, gradually it has been replaced through programs such as After School Matters.

Never slowing down, the happily married artist and father of a busy two-year-old—Statik is currently putting the finishing touches on a distinctive mural on the wall of the Hard Rock Café located in the River North neighborhood.

For more information on where to check out more of Rahmaan Statik’s works, visit: www.statikone.net