Lee England: Beyond the Violin

The violin is a delicate instrument, yet as it ages, it becomes more vital and distinct in its unique sound. When you first look at the instrument, the human eye will see it the same as others. Still, when it’s played, most musicians would identify becoming connected—spiritually and soulfully with the instrument.

Lee England, Jr.’s infatuation with the violin at age six was short-lived. After convincing his parents he wanted to learn how to play, he didn’t expect it to be so hard and wanted to quit, but his father, Lee England, Sr., wouldn’t allow it.

“When I first picked up the violin after seeing it at school, I thought it was something I wanted to do. So, I picked it up, and it was terrible. I went to my father and told him I had quit. It doesn’t sound like the violin. He asked me, ‘Do you want to quit?’ I said, ‘Yes.’ He says, ‘Okay, you have to practice 15 minutes a day.’ In my 6-year-old mind, I thought that’s all it took?” England says.

After being tricked into sticking with practicing, England became good at mastering the violin and grew a real passion for music.

Growing up in Waukegan, a suburb 26 miles north of Chicago, England, hails from a musical family.

I didn’t know that my family was that gifted in song. It was a traditional Black family, and everyone could actually sing. I have one aunt who was a recording artist who sang the blues. My cousin played the bass, and my mother played clarinet throughout high school. They didn’t tell me this until later.”

England credits the church and the musicians who mentored him while coming up. In addition, his pastor Reverend C.L. Fairchild positively influenced his musical and spiritual development.

“When you have singing pastors, you have incredible musicians backing them up. There was an organist, I give him a lot of credit, Richard Gibbs, for my style. They would use music to set the tone for the pastor and calm the spirit, bringing things in unison and putting us on the same vibration as the pastor.”

Breaking Into the Music Business

A former music teacher for Chicago Public Schools, Lee first gained recognition in 2009 through Sean’ Diddy’ Combs on MTV’s Making the Band, bringing a unique instrumentation of both hip-hop and classical music to a new audience of viewers. After that, England began sharing the stage with music legends Stevie Wonder, Jay-Z, Jermaine Dupri, Akon, and other significant names. Having performed at a private celebrity party, NBA Hall of Famer Michael Jordan was impressed by his performance and offered him an endorsement deal for his Brand Jordan label. Later, England would sign under Quincy Jones’ management company. 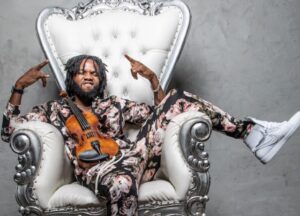 At 38, England has built a successful career as a singer, songwriter, and notable session musician, having worked on several collaborative works. But, over the pandemic, like so many entertainers and people in the music industry—touring and shows slowed down, giving way to more creative freedom in the recording studio.

Between songwriting and producing, England formed an orchestra of like-minded musicians.

“I’m firmly rooted in classical music and classically trained, but I’m into hip-hop, Gospel, Blues, and all those things. The orchestra is called The Bridge. Bridging the music of two worlds and bringing real instruments with a gritty edge.”

Having relocated to Los Angeles and later to New York City, the soulful violinist finds his creative juices flowing between street performances, session work, and penning nearly 1,000 songs to grow a solid catalog of songs within reach.

At a private showcase, “Glow Up,” over the summer in Chicago, England performed some of his new music to a packed audience at the Epiphany Center for the arts. I asked him about the standout songs that would appeal to different demographics of his audience.

Which song would the women fans appreciate from your new album? He smiled and answered, “There’s a song called “Dive In.” This song is an experience; it’s a musical entendre. For a person who loves music, it will do one thing for them, but for someone who loves lyrics and the content, they can take it sexually.”

For the fellas, England describes another song, “Gentleman.”

“It’s all those things as “Dive In,” but instead, I’m still being myself. I’m not a punk; I’ve found someone who vibes with me instead of someone who doesn’t connect with me,” he says.

He explains, “One thing I truly understand is there is a special type of peace for a man who has found true love. I knew for a long time to give a woman the option. Be honest and guilt-free about being yourself. Be yourself upfront.”

Having lost his father while in college, England wrote a song about his profound relationship with him called “Even God.”

“This one is very straightforward, and it’s a conversation with my father and God. Father as superman and father as God,” he says.

He has a new single receiving critical acclaim, “Beyond,” a melodic mid-tempo joint that feeds into African percussion grooves, House music with the Gospel classic of “This Little Light of Mine.”

The Southern Illinois University graduate feels he’s in a good place with his personal and professional life.

Confident, he says, “I have an entire team. I have the right people as support. I’m being managed by DJ Wayne Williams, who has worked hard for a long time. I knew days like this were coming. That’s why I kept creating and I practiced gratitude. I lived my entire life on the verge of something exploding, and that’s very exciting.”