French filmmaker Harriet Marin Jones never had the chance to meet one of the most influential African Americans in the United States, her grandfather, Edward Jones, because she was born just a few years after his passing. However, in the 1930s and 40s Edward Jones built a $25 million empire in Chicago through policy, a numbers game, making him one of the most powerful Policy Kings ever to walk the streets of Bronzeville.

Marin Jones’s new documentary reveals a fascinating chapter in Black Chicago history.
King Of Kings: Chasing Edward Jones; premiered at the Chicago History Museum as part
of the International Film Festival and won with overwhelming success. The film takes a deep
look into Marin Jones’s extended family’s past to tell this remarkable and compelling
story of a legendary African American who rose to financial and political
prominence, reclaiming his legacy as a man fighting for respect in a racist society.

Edward Jones managed to live a lavish, admired life and became a
prominent figure of the 20th century. Jones, the son of a Mississippi preacher, ran a
numbers racket known as “policy,” which later went legal and state-run as the lottery.
Edward Jones’s granddaughter, Harriet Marin Jones, spent a decade and her own money making a documentary, King of Kings. 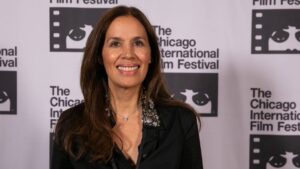 The filmmaker made her feature film directorial debut with the French comedy “Marry Me” in 2000, studied in Washington D.C., and later in New York City, where she received her graduate degree in filmmaking from New York University.

“African Americans once controlled this numbers game; eventually, the mob took
over and then eventually, the government took it over, changed the name, legalized it
becoming the state lottery, ” Marin Jones said.

Marin Jones discussed that her mother never said much about her famous grandfather who
she eventually discovered had been one of the wealthiest men in the United States.

The “Policy King” went head-to-head with Al Capone’s “Outfit” at the same time as he
hobnobbed with celebrated artists, including Josephine Baker, Frida Kahlo, and Duke
Ellington.

“A lot of the money that was made, they invested back into the community. And when you
think that in the 30s and 40s, the south side of Bronzeville was a strident community,” said
Marin Jones.

In the film, music icon Quincy Jones discusses that he knew the Jones family while growing
up on the South Side and has his film project about the Policy Kings. &quot; I call them the
Robin Hoods of Chicago because they took care of their people,” said Quincy.

The Jones’ story is an integral part of Chicago’s illegal racketeering syndicate known as
a policy. As Author Nate Thompson explains, “The baby brother Mack Jones was a policy runner and rider for one of the other people before his brothers got into the business.

It’s because of the baby brother that Ed Jones decided to get into the business.&quot;
In the film, you learn about how the policy kings went head to head with the mob and the
the subsequent demise of the syndicate.

They brokered a hands-off arrangement with the mob, the police, and most of Bronzeville and other South Side neighborhoods. “He reinvested in the community,” Marin Jones says, “putting a lot of money into legitimate, Black-run businesses.”

For more than a decade, the filmmaker, who lives and works in Paris, has been thinking
about, researching, filming, and editing her first feature documentary, “King of Kings:
Chasing Edward Jones.”

Marin Jones is seeking a distributor and plans to accompany the film with a book
on the same subject. It has everything from mob warfare to kidnapping (Ed Jones was
abducted in 1946) to prison stretches to federal investigations.