Anton Seals, Jr.: Fighting for the Future of Englewood While Preserving the Past

The Englewood Nature Trail is part of the city’s multimillion-dollar investment stretching 1.75 miles along an unoccupied railroad corridor. Once owned by Norfolk Southern, the city acquired the land in 2018 and invested $6 million for phase one design. This summer, the U.S. Department of Transportation awarded $20 million in grant funding for the design and construction of the trail project. Since the success of the 606 Trail on the city’s Northside, a group of community agriculturists proposed this project as a productive commitment to bring vitality to Englewood through urban agriculture and clean environmental development. 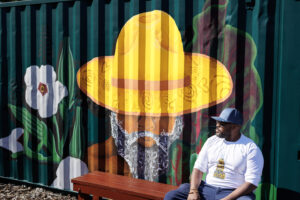 Anton Seals, Jr. played a significant role in the effort to bring legislative awareness and fight for funding for the Englewood Nature Trail. He co-founded Grow Greater Englewood with Sonya Harper nearly eight years ago.

“We started in 2014 when it wasn’t an organization; it was just a coalition. We were looking to ensure it would be Black people represented in this urban agricultural movement. They announced Whole Foods would be in Englewood, which led to a community benefits agreement. In 2016, we had seed money to grow, and in 2017, Sonya became the State Representative for the district,” he says.

Instead of allowing the hard work and dedication of the group to subside, Seals decided to officially step in to run the operations as Executive Director in 2018. The organization has a small group of paid staffers and a larger group of volunteers to expand its mission of creating a landscape of ‘agri-culture’ for the community.

Seals attended Columbia College with interest in filmmaking and production and later landed a Congressional staffer position for Congressman Bobby Rush. Working several years as a Senior caseworker, Seals was at the heart of understanding the lack of resources in underserved communities like Englewood.

Over 30 years, the once vibrant middle-class community of homeowners and merchants gradually dwindled from fighting high crime, a horrific mortgage crisis, declining businesses, and Black residents relocating to the suburbs.

My grandparents were born here, so I’m a third-generation Chicagoan. Many folks’ families came from different parts of the South in the 1940s and 1950s. Back then, there was no Dan Ryan expressway separating Washington Park and Englewood,” Seals explains, whose family lived at 56th and Princeton before World War II.

Decades later, during the mortgage crisis in 2008, residents were leaving the neighborhood, often abandoning their property from foreclosure, and developers were scooping them up for a fraction of the original value. As a result, some properties were demolished, leaving numerous vacant lots, creating an eye sore for the area.

While working as a Congressional staffer, Seals would work directly with community advocates fighting for better food access in Englewood.

“Some awareness started when I worked for Congressman Rush in the 1st Congressional district. Bobby doesn’t get credit for it. We hated the term ‘food desert,’ but that was part of the concession. He was the member who championed this issue with the Congressional Black Caucus.

“So, I had free reign in the district office because I was the doing work. I did my casework, but I was organizing as well. We created Good Greens, an urban agricultural group. We would gather food advocates to inform USDA Region 5 of these efforts, which became the framework for a clearing house for all the resources,” Seals added.

A grocery store wasn’t enough to fight the problems rooted deeply in the food crisis. Seals says, “With anything policy, proceeds programs. If you build a store, you resolve the issues—it’s not that simple.

If you build, it doesn’t mean they’re going to come. We tried to investigate behavioral patterns around food life, chronic health disease, hypertension, heart disease—diet-related diseases. Even with other options, it doesn’t mean people will choose. If your behavior is the same, it doesn’t change the narrative. Convenience is king.”

The Englewood Trail is a dedicated initiative for Grow Greater Englewood. There are three layers to the project. 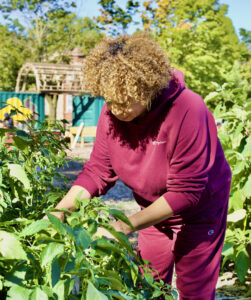 Seals explain, “The first layer; we’re looking at two miles which run from Lowe to Damen along elevated rail tracks that nature has already reclaimed. What we’re building is the nation’s ‘Agri-hood district. We’re using agriculture as a ‘through line’—agriculture meets conservation. You can’t have a healthy, wealthy nothing if you don’t have good air and clean water,” he continues. “The second layer, creating a workforce pathway—into conservation and green jobs. Agriculture is more than food consumption; it’s energy, materials, light, and industrial manufacturing, which the 59th St. corridor once was, pushing the government to do what we know is needed.

Lastly, he breaks down the third layer, “Our community should not wait for something to come, but making the call to explain this effort is our legacy. Coming up with ways for homeowners to continue to own their property. We want to freeze the taxes in Englewood.”

As a husband and father, he feels it’s vital to protect and build preserving Black spaces where families want clean, safe, and accessible transportation. “Reworking the imagination of what the hood is without the hood having to disappear,” said Seals.

“This nature trail project is a part of the African American historic districts across the cities. Our job is to connect them from Austin to Roseland. Chicago is our city, and we should embrace the diversity of our communities, and it’s not us versus ‘others.’ Only we can dispel that when our kids feel safe, and it will take time. We’ve been dealing with the realities of what the hood is—these concepts. We are a product of the environment— and when you improve the environment, you will improve the outcome of it surviving.”