The Legacy of A. Philip Randolph Continues

When we hear about Chicago’s Southside Pullman community, we often think it was associated with the rich history of African American Pullman porters. For those who have grown up on the far Southside or are familiar with its history, the significant presence of Black residents in the historic Pullman neighborhood is on the north end or census tract 5002. It is rarely included in the PR that discusses the Historic Pullman District.

The struggles of the Black workforce in the post-Depression era was brought to the forefront by Asa Philip Randolph who organized and led the first African-American labor union in 1925. The Brotherhood of Sleeping Car Porters was created to support Black workers against unfair labor practices in the workplace. He became an advocate against racial discrimination and organized and led groups to successfully fight against growing economic and educational problems in the African American communities. 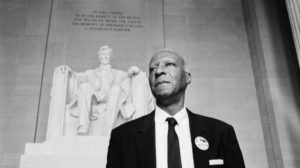 His accomplishments and strides were a blueprint for labor unions today. His voice was often heard boldly during President Franklin Roosevelt and President Harry S. Truman administrations ending segregation in the armed forces.

The A. Philip Randolph Pullman Porter Museum was established in 1995 by Dr. Lyn Hughes in the Historic Pullman District. In 1880, the small company town was built by George Pullman to provide housing to all of his employees except African Americans who could  to walk to work where everything was contained and controlled by him. Nearly six decades later the four-block radiance still lacks diversity.

Hughes says it is a problem they deal with daily. “The perception is presented to thepublic that the African American population in the area is not a part of the historic district. The narrative is,is strategicallynarratedin a way that gives the perception that the larger partof the area that is 90% African American is different and it is not. The historic Pullman area is from 103rd to 115th Street. The Bishop Ford Expressway to the Metra train station is the historic district declared by the US Department of Interior as part of the National Park Service,” she says.

“In 1965, department of interiorapplicationor historic designation had to include the boundaries. However, it states  very clearly 103rd to the 115th. African Americans did not move to the Northend of the historic district until the first Black resident moved into that area until the early 1960s.”

Dr. Hughes felt it was important to educate people about the Randolph’s work but also to understand significant contributions by Pullman Sleeping Car porters who under conditions. Many porters lived in major Northern cities like Chicago and Detroit; along the Eastern border in New York City, and Philadelphia; and Southern towns such as Philadelphia, New York City, Charleston, and Charlotte. However, they were not welcomed to live in Pullman’s alternative version of Mulberry.

“That is the problem. Blacks were never residents until the 1960s. We lived in Bronzeville. We were not allowed to live there,” says Hughes.

When finding a vacant sites build out the museum, Dr. Hughes said the Pullman community was selected because the right location was available.

“It had nothing to do with anything other than that. It was the discovery of the historical connection for African Americans. It pissed me off when I discovered that Black folks didn’t live in the historic part but worked for the company and made Pullman a very wealthy man– I became incensed. Once again, a blatant demonstration of African Americans being taken advantage of and not recognized for their contribution.That is why the museum was established.”

Borrowing money from his friend Marshall Fields, Pullman purchased 4,000 acres of land to build his factories and homes. He recognized and hired Blacks as low-cost labor, and it made him a very wealthy man.

Hughes says, “Blacks made a tremendous contribution to the company. Once he built the factories and manufactured the cars, he realized he had to have staff. Recently freed slaves were trained or groomed in hospitality. He was an astute businessman and saw instantly he had a labor pool from which he could draw, that did not require a long learning curve. He was a businessman who seized the opportunity.” 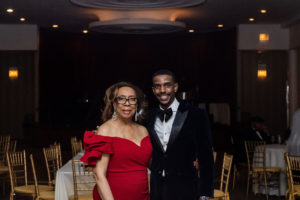 David Peterson is the Executive Director of Museum 44 and runs the operations and programming development of the facility. As the next generation of leadership, Peterson has taken a primary role in building a new network of young civil activists of meeting the social and economic challenges of the community. He says often visiting students are not aware of who A. Philip Randolph is until he presents his story in a familiar way.

“The only thing that genuinely draws them to it is whatever I am using as my medium at that particular time. Either that be an entertainment event, school tour—it is only at that point that they get there they get interested. Up to that point, they have not talked about him. They do not include him in their curriculum at CPS or other educational institutions,” he says. “There are schools around us that do not engage us at all. We are across the street from Butler Prep High School, and during Black History Month, I would think they would come over, but that has not happened. There is a disconnect in the educational system that has strategically excluded the contribution of A. Phillip Randolph in American labor.”

March on Washington for Jobs and Freedom

On August 28, 1963, Randolph invited Civil Rights organizations and community activists to march to Washington, D.C. Randolph yielded his time to speak to a young minister as his keynote speaker to address 300,000 on the nation’s capital steps. It was there, Rev. Martin Luther King delivered the “I Have A Dream” speech.

Hughes explains, “It was Randolph who spearheaded the entire march, and he was smart enough to understand the importance of organizing. He then drafted Bayard Rustin, who was trained by the Quakers. Rustin was a premier strategist, and they worked well together to organize the historic march. With that group of people were already doing the work and Randolph recognized the culmination of their efforts. Rev. King was not supposed to be the keynote speaker, and Randolph was scheduled to be the keynote,” Hughes noted.

“He, in his infinite wisdom as an elder Randoph decided he would have King be the keynote speaker because he thought King was the better speaker. It was all about the work and he wanted to get the most out of these efforts. The rest is history.”

The Future of Randolph’s Work 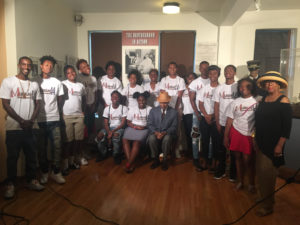 In the 9th Ward, Hughes and Peterson have seen additions from the shopping mall; the Method Soap factory, and the Pullman Community Center—a 135,000 square foot facility for the community for programming. They said there is still much work to do. They are focused on creating programs to train and educate financial, social and environmentalists.

“The Randolph Dreams CDC has now become the civic engagement ‘action and development arm’ for the area that will enable the creation of a template. This template can be used in Black communities across the country. What better place to start than the area that fostered the birth of the first Black labor union in America?”

Peterson adds, “Our cultural, economic manifesto is a roadmap for people to use. In addition to that, we have our Juneteenth family reunion festival. Of course, we always do something for Randolph’s birthday on April 15. We are excited to have some new exhibits for our season opening. For our grand initiatives program division, we will be instituting things on a state level with the Urban Agricultural Act.”