When you have a conversation with Kari Steele, her humble disposition as a public servant puts most people at ease. A cross between Steele’s keen sense of being a good listener dripped with a little Southern charm—her rise as the Commissioner at the Metropolitan Water Reclamation District of Greater Chicago (MWRD) enters a second six-year term.

On January 10, she became the first African-American woman elected as President of MWRD, one of the largest wastewater management agencies in the world.

Not an easy feat by any measure. At first reluctant and growingly engaged, Steele follows in the political footsteps of her father, former 6th ward Alderman and retired Illinois Appellate Court Judge John O. Steele. A path she had not planned on becoming her ‘calling’.

Unlike other children of political figures, she did not attend Chicago area schools; or roll with the status quo in-between spending her summers in Chicago and staying with her mom in Houston, Texas. 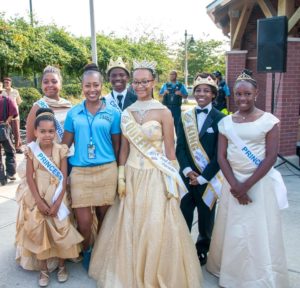 Earning her Pre-med degree in Chemistry from Xavier University in 1997, Steele would spend her summers as an intern for MWRD.

She held several positions working in Houston for a water testing company and eventually moving to Chicago to work as a control lab water chemist at the Jardin Purification Plant near Navy Pier. Having worked there for nearly six years, she accepted a position at L’Oréal as a formulating chemist where she helped to formulate their ethnic hair care products.

Throughout this time, she gradually became more active in community meetings, returning to her family’s old stomping grounds. She admits, as a child, she wasn’t that enthusiastic about having her free time consumed with politics.

“I did not like it at all. As a kid, it was something I had to do. I was a kid sitting in community meetings. I was the kid sitting in the back of the room pouting. I had to pass out literature or stuff envelope– it felt like a chore,” she recounts.

But while away at Xavier University in New Orleans, she began to understand the importance of having a strong voice in the African American community.

More Than a Title

“In college, I volunteered for Marc Morial because it was exciting to see a Black man run for mayor. It made me think of Harold Washington back in the day here. That was the first thing I stepped out to do on my own. When I came back to Chicago, I was volunteering. The ward office felt like a second home. My dad wasn’t there, and Alderman Fredrenna Lyle was in office, and she asked me to revitalize the 6th ward Young Democrats,” she said. “That’s when I got involved in a leadership role. I was the chair, and I was doing after work sets. I encouraged my friends to be involved.” 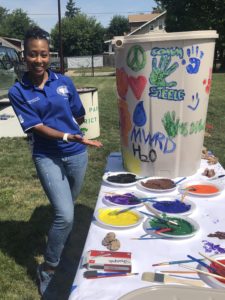 “From there I joined the Cook County Young Democrats, became the Chair CCYD and was active with the Illinois Young Democrats of Illinois. Politics was my extracurricular activity back then.”

While at L’Oréal, Steele became the President of Young Dems and was actively attending community meetings throughout the Southside. When a major issue came up concerning Southside residents who were experiencing major basement water backups, she found herself giving feedback and knowledge about the Water Reclamation Plant and the City of Chicago Water Department to help homeowners.

Seeing this triggered the need to have someone who can educate and help people understand what the functions of Water Reclamation do. After the urging of her peers and supporters, she threw her hat into the ring to run for Commissioner on the nine-member board.

Remembering the first time she ran for office. “There was no one on the board that represented all of Cook County who lived South of Roosevelt Rd. There wasn’t anyone who was a water chemist or had a chemistry background. That made me more excited to throw my hat in the ring,” she thought. Her first attempt running for Commissioner of MWRD was unsuccessful.

“While I had the momentum going, I came very close the first time. It shocked a lot of people, I was in fourth place. By the second time, I was able to gain more support and I won the seat.”

The Functions of MWRD

The Metropolitan Water Reclamation District of Greater Chicago oversees the function of treating wastewater from homes and businesses through the combined sewer systems which also includes stormwater. The water is pumped into the treatment plant and goes through several stages of treatment until it hits the final stage of ‘disinfection’ before the water is released back into the environment. This process significantly reduces any remaining bacteria and viruses to help protect the public from exposure to potentially pathogenic microorganisms.

Steele says it’s vital to not only reassure residents and business owners that our water is safe but also working with the EPA and other environmental groups, so standards are followed.

“After we treat the wastewater, it’s released in the Chicago waterways. It affects aquatic life. Our recreational activities on the river. Also, with Global Warming that has an effect on the torrential downpours, we see lately,” she says. In the last few years, weird weather patterns are more difficult to track. She adds, “We have to be prepared whether it’s with gray infrastructure, an example is our tunnel systems or green infrastructure or permable pavement used to make sure when we have extreme downpours, the city doesn’t end up underwater.”

As Steele steps into her new role leading the $1.1 billion agency as also the youngest to hold this position, she has no plans to pursue another political office anytime soon.

“It’s too far ahead, but I’ve learned not to say ‘never.’ I love Water Reclamation. The science of it keeps me sane. Even with all of the political stuff, I can go and talk to kids about STEM careers. The look on their faces is priceless,” said Steele. 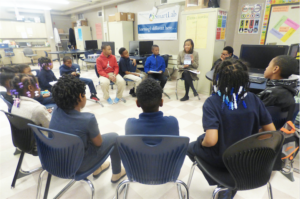 President Steele speaks to a group of young students.

Her goal as MWRD President is to see “more changes in diversity in all areas of the department”.

Steele is very aware of the shoulders she stands on and being the ‘first’, but she says it has been her sorority sisters of Delta Sigma Theta Sorority, Inc. who have helped with clipboards in hand.

“The women around me in that organization keep me going, and they inspire me. I love being around ladies who aren’t just talking, they do the walk.”

As a daughter, wife, and mother of an extended family—she is grateful for the support she receives from her family.

“They have guided me through everything. Everything I do or have done, I can look back and say, it was because they exposed me as well as being a reflection of them. My mom, my dad, and my grandfather have touched my career path with what they’ve done and my husband, Maze, inspires me and motivates me.”