Valerie Jarrett “Finding My Voice” Is A Must Read

During President Barack Obama’s eight years in the White House, he made history becoming the first African American United States president. But, compared to his predecessors, President Obama set the course for having the most women in senior level positions in his administration. As the longest-serving senior advisor in the Obama White House, Valerie Jarrett made tremendous strides during her professional career before joining his inner circle.

Three years ago, Jarrett returned to the private sector and had been on a virtual roller coaster. She is considered one of the most influential and famous faces on the planet. As a mother, daughter and soon-to-be grandmother, she doesn’t seem to slow it down. 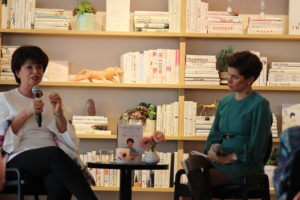 Her new book, Finding My Voice: My Journey to the West Wing and the Path Forward was released the first week of April and her hometown was one of the first promo stops. As opposed to her friend, First Lady Michelle Obama—Jarrett sidestepped the bigger venues and opted for several smaller intimate groups to promote her book.

The Wing was one of the venues to host Ms. Jarrett’s book release event. It was the perfect ‘coming out’ gathering to showcase the new Chicago hub for the women-friendly co-working space. It’s located in the West Loop’s Fulton Market district. The white open loft-like space presented a cozy and relaxing environment surrounded by open windows and bookshelves with a café kitchen nestled in the corner.

Jarrett sat candidly in front of a room of 200 women from all walks of life, discussing her journey from her days as a young mother; choosing her career path as an attorney; working for both Chicago mayors Harold Washington and Richard M. Daley, and later her friend President Barack Obama. What was surprisingly pleasant was her down-to-earth and honest demeanor which put everyone at ease. With her both her mother and cousin sitting close by, she felt at home sharing her stories with humor and sincerity. 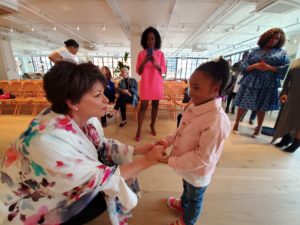 “Find those friends in life that are rooting for you. We’ve all had those ‘nice nasty’ friends who actually don’t want to see you do well. Let them go. I’ve had to reach beyond the nucleus of my family; my cousin is here, and she’s my best friend and my friends are my family. Those are the family that you choose. So, select people that are going to lift you up.”