In the 90s, there was a limited representation by Black designers. Co-founder, Mustafa Abdullah (AKA DJ Mustafa Rocks) was winding down his popular Brotha Man line of fashion headwear. Abdullah’s idea was to add more culture to fashion. He joined forces with fellow Chicagoan Brian Coleman – who had been a rep for Brotha Man – to launch AfroWear in 1996.

Abdullah and Coleman were pioneers in streetwear brands. The forward-thinking tenacity of their team combined with a manufacturing relationship with American Needle put them ahead. “There were leaders in the retail space, as far as selling apparel,” explains Coleman, “but they weren’t making clothes. Stores sold popular brands, like Girbaud, but it wasn’t in the mindset to make clothes. We didn’t have a lot of competition.” 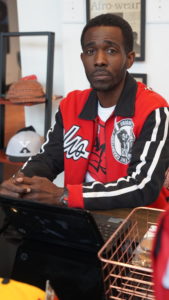 With a collection of long- and short-sleeved t-shirts and baseball caps, their first logo was the red, black and green AfAm flag. Coleman and Abdullah initially sold their wares in beauty and barber shops, as they had a steady flow of discerning customers, and proved to be great places for market research.

“The people there were very honest and very bold,” says Coleman. “[Customers] are talking among themselves, and if you’re trying to sell your product and nobody turns around to pay attention, something’s wrong. If they turned and paid attention, it was a good sign. And when they reached into their pockets to buy, we knew we really had something.”

AfroWear grew in popularity and the brand was carried in Tony’s Sports. They expanded the line to include sweatshirts, bandanas, and shirts with embroidering and applique. After entering The Niles Show, in Niles, IL, where brands displayed their designs for hundreds of sales reps and buyers for various retailers, AfroWear was picked up by regional stores.

After 9/11, the retail market declined, but Afrowear was able to maintain consistent sales with its out- the-trunk business.

“We literally sold out of our trunks,” recalls Coleman. “We drove around, pulled up to shops, and dropped things off for clients.”

With Abdullah as the designer, Coleman handled accounts payable, accounts receivables and proposals, and got into product placement. AfroWear apparel was worn in HBO television series The Wire and in comedic films Barbershop and Barbershop 2. They built relationships with MGM studios to gain placement in other films.

By 2003, Mitchell & Ness vintage baseball jerseys were a trend, with rappers paying hundreds of dollars per shirt. AfroWear manufacturing partner, American Needle, was the official fabricator of hats to match the popular jerseys. To get deeper into the lucrative market, American Needle licensed AfroWear to create other apparel and helped the company gain nationwide exposure. Coleman likens their deal to the music industry: “It was like a record deal, but with clothes, and not nearly as shady.”

The licensing deal rode through the trend in ‘07, and attending the Magic Show in Las Vegas culminated in international exposure, and give them access to hip hop legend Kool Herc, Doctor Ice from UTFO, and Murphy Lee from St. Lunatics.

The last decade has been rife with ups-and-downs for AfroWear, as they recovered from a loss in sales when their star rep within the manufacturer left and was replaced by one who couldn’t connect with the brand and culture. As sales slowed, Coleman went on a spiritual journey to find a balance, connect with himself, his purpose and temptations of success. Concurrently, they entered the digital space.

Competition cropped up, and the ease of t-shirt printing pushed AfroWear into direct-to-garment (embroidery and cut and sew), which ultimately enhanced the quality of the band.

Mustafa Abdullah has recently parted ways with AfroWear, and remaining partner Brian Coleman has continued and has opened a retail outlet, located in the Supreme Life Building on 35th and King Drive. Inside the store are also pictures and plaques from the Defender, as an exhibit that takes us from the inception of AfroWear to the present.

“One of our mantras is Self-Pride through Fashionable Clothing, and there are new pieces that everyone should be wearing,” Coleman insists. In 2020, we look forward to the release of the Back- out Hat, which is more than a visor and less than a hat. Designed by Abdullah some years ago, the hat is open at the top, originally designed to wear with locs and afros. Coleman is also proud of the We Are The Champions line featuring Tommie Smith, the legendary athlete who raised a gloved fist to symbolize Black power when accepting his gold medal in the 1968 Olympics.

The Afro Shop currently carries the AfroWear brand, as well as Brotha Man caps from the 90s and the new unisex Afro Angel brand.