It takes a great deal of courage to step out on faith when leaving home to pursue a new chapter in one’s life. As a young man, Donald Lawrence knew the world was a bigger stage, and the curtain was wide open beyond his hometown of Gastonia, North Carolina.

After graduating high school, he attended the prestigious Cincinnati Conservatory of Music as a musical theater major. The self-taught pianist was destined to find his path in the theater—touring around the country, growing as a songwriter, producer, and musical director. The journey would take him for the next 25 years working with the top music artists and musicians in the entertainment world. As the lead producer of the Tri-City Singers, as a frontman—their reign on the Gospel charts has produced multiple albums. Lawrence’s solo album “I Speak Life” would be a gamechanger earning him six Stellar awards in 2006.

Since then, he has released several albums including The Law of Confession, Part 1; YRM (Your Righteous Mind); 20 Year Celebration, Vol 1. Best for Last along with collaborations on The Clark Sisters- Live! One Last Time which earned him
Producer of the Year in 2008. Currently, on tour with the McDonald’s Gospel Celebration as musical director and featured performer—he’s reunited with the Tri-City Singers on a new album, “Goshen.” 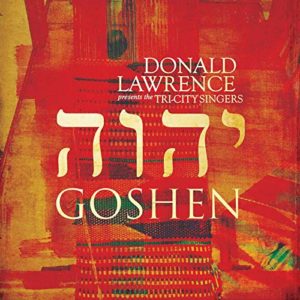 He says the album title holds significant meaning. “I went back to revisit the story of the Exodus because it’s almost kind of a parallel of where we’re at today with different types of oppression–mentally oppression with government and politics. It’s liberation theology, and “Goshen” really is the story of the Exodus, just told in a contemporary and urban way—in a ‘Lawrence way.’ I revisit the story of Moses. “Goshen” was the body of land where Israel was—it’s in the North part of Egypt by right before the Red Sea. It’s where they kept the children of Israel.”

As a songwriter and producer, Lawrence explains the process is centered around telling a story, so it connects with people on a cellular level. “I approach music from a storytelling perspective in general because of my love for theater and education in musical theater. I’ve always approached music from a storytelling perspective, I prefer to do it that way,” he says. “When I do
it that way, I can give tell you a story that can give you some type of spiritual wisdom to help you whether it’s therapeutic
where its what’s in your life or how to deal with it. I prefer to approach music that way.”

Having moved to Chicago nearly 18 years ago, he can understand why fans would think he was a native where some of the most iconic architects of Gospel music called home. “It feels like I grew up here because I have so many friends, and the community embraced. Chicago is such a landmark for music—not just Gospel music but music in general. 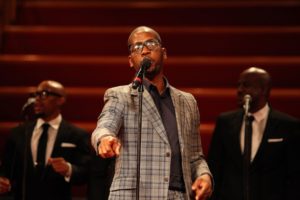 My thing would be growing up and paying attention to what was happening in Chicago musically and near here in Detroit,” Lawrence explains. “It influenced the way I felt about Gospel music and when it comes to bands. I’m a big band, Swing music lover as well as big on Black theater. I think culturally, Chicago is that place where people of color is alive. They are very confident in their color. If anything, that influenced me about being in Chicago is the confidence of color— particularly my skin color.” His love for theater opened up a world of diversity outside of the church and became another way of expression. The lessons learned between the two worlds strengthen his compassion while fueling his passion for music.

He says, “I stumbled upon the theater. One of my friends asked, ‘how did you figure all of this stuff out’ because no one around us did it. It wasn’t like I was put in the art schools early, it just showed up in me, and I found my way into it. When I didn’t know something, I would go ahead and read on it. Being in the theater made me more diverse and talented because everybody just blends together, and you accept people for who they are.”

As the music business model has evolved into the digital front—he admits the time and energy he invested in production could’ve also shifted to learning earlier about the social media craze.

“While I was doing music and art—I would have paid more attention to technology. Other than that, I enjoyed my journey. It wasn’t easy and still not easy—I have to work. A lot of people knew me before I got into Gospel music. I grew up in the church, and my first professional job was on the R&B side. I was the music director for Stephanie Mills. I came into the New Jack Swing era when it started. I would always say, Teddy [Riley] is one of my biggest inspirations in wanting to be a producer,” Lawrence says he enjoyed his time in the secular arena and has no regrets.

This summer, Lawrence will continue on the McDonald’s Gospel tour in various cities and currently working with the Tri-City Singers on musical celebrating their new anniversary release of “Goshen.” He says the production is slated to open for a limited run at the end of 2019.