This story is about my journey through the history of my family, a journey preceded by events that formed the foundation of this incredible adventure. The journey begins with Robert Sengstacke Abbott, founder of the Chicago Defender and the Bud Billiken® Parade. Mr. Abbott was born in 1868 on St. Simons Island, off the southeast coast of Georgia. He later moved to Savannah, Georgia and eventually to Chicago along with other Sengstacke family members.

While in college in 1976, our men’s chorus toured the south. Our first stop was St. Matthew’s Episcopal Church in Savannah, Georgia where Reverend Charles Hoskins was Rector. Early during our visit, a gentleman walked up to me, introduced himself as Professor Joseph Jenkins, and told me he was my father’s high school principal. I met a friend of my father’s sister, Flaurience Sengstacke Collins. Two members of the church drove me to a family burial site marked by a tall, white obelisk with the name SENGSTACKE engraved in bold letters near the base. During the close of our last concert, we were standing around the congregation. Reverend Hoskins then spoke and said the following (this is not a direct quote though is my best recollection):

One of the founders of this church is Flora Abbott Sengstacke. One of her descendants is here with us today, that man standing over there with the funny beard.

After the church concert, I met a member of the family. Later, Reverend Hoskins showed us church records abounding with names of Abbott and Sengstacke family members. Reverend Hoskins also told us about Rev. John H. H. Sengstacke, my great grandfather, and clearly demonstrated a knowledge of my family’s heritage. It should come as no surprise that well before this time I felt I had arrived at home. 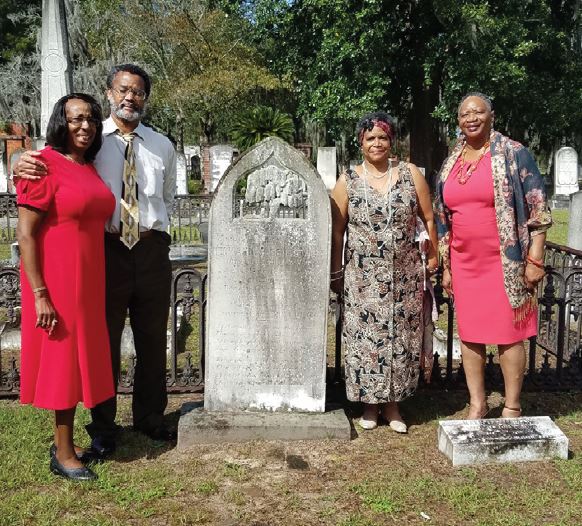 It wasn’t until October 2019 that I returned to the church, now led by Rev. Guillermo A. Arboleda. In attendance with me this time were my wife, Armelia Sengstacke, Ed.D., LaTanya Abbott-Austin (great grandniece of Robert S. Abbott), Maurice Abbott (great grandnephew of Robert S. Abbott), Joslyn DiPasalegne (grandniece of Mr. Abbott) and Marilyn Jivens (grandniece of Mr. Abbott and Ms. DiPasalegne’s sister). Last but not least, I was reunited with Reverend Hoskins (who had since retired) after forty-three years!

I thank God for allowing me this opportunity to connect with my family years ago, and reconnect today. We all have a history to be preserved and told. This is not just an African American story nor is it just an American story, it is a human story reminding us that the past is our foundation that will never go away. If we neglect its existence, we may never realize the full extent of our heritage and the potential of our legacy. Let us all never forget the connections with our past before they are gone forever.

About the Author: Marc Sengstacke