Grenada, known as the Spice Island, is a tropical jewel embraced by soothing turquoise seas, rich fertile soil, soothing trade winds and an abundance of tranquil souls. Locals and tourists-like, love to gather daily at Gran Anse, one of the world’s most beautiful white sand beaches. A more secluded get-away is crescent-shaped, laid-back, tranquil and romantic, La Sagesse Beach. A blissful eco-resort, the La Sagesse Hotel, Restaurant and Beach Bar, nicely tucked away on the beach, is the place to stay. The rooms have a boutique-like charm and the menu is full of local delights: rum punch, Mahi Mahi, coconut water, fish tacos, stewed chicken, etc., etc.

The Carenage or inner harbor is a lovely place to spend an afternoon shopping and getting a feel for everyday life on the island. In the majority, African descendants consist of 95% of the population. The biggest community gathering is the Friday night fish fry at Gauyave. Treat yourself and partake in their culinary delights. And if you like to party, don’t miss Grenada’s carnival, Spice Mas held every August. Two other islands, Carriacou and Petit Martinique
are part of the nation. Hop on a boat and bask in these two tropical jewels. Ecstasy beckons. 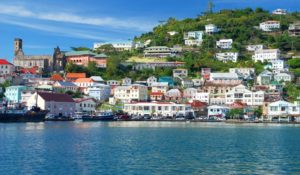 Camerhogne was the original Taino name of Grenada. On his third voyage to conquer land and wealth on behalf of Spain in 1498, Columbus christened the island Concepcion. It is believed that Spanish mercenaries from Grenada, Spain bestowed the name Grenada after their hometown. Spanish conquerors, preoccupied with their immediate desire for precious metals in South America, and struggling to quickly conquer the Tainos, used Grenada as a transitory convenience.

In 1609, a few well-armed English settlers landed in Grenada. Less than a year later the few that survived ferocious Taino attacks were back in London explaining to their government, merchant and religious sponsors their failure. However, to the demise of the Taino, the European conquerors kept coming. Supported by barbaric cannons, unleashing deadly firepower, by 1654 the Tainos were on the verge of being extinct.

The magnificent Tainos endowed by the Universe with a glorious life, basking in a tropical paradise, minus a care or a want, the majority slaughtered, erased from the Earth. Once the Tainos were weakened, Grenada could be bought and sold at will. Cunning and ubiquitous, the French, outmaneuvering their European cousins, seized Grenada in 1652. In control, they appointed governors and sold shares in the French West Indies Company that administered the island.

Led by revolutionary spirits like Julien Fedon, revolts in Grenada rose and fell dating back to the 17th Century. However, the root of revolutions like Fedon’s remained in the Grenadian soil. In 1897, in the village of La Digue, the mother of Malcolm X came into the world. She later migrated to Montreal, Canada. In 1918, at a Marcus Garvey U.N.I A. meeting in Montreal, she met Earl Little, Malcolm X’s father.

Today, Grenada, with a population of approximately 110,000, is making a go at life on the 133 square mile island. The cruise ships come, pause for a day, and move on. In the capital, St. Georges, the hilliest city in the Caribbean, there is a, whatever will be will be, serenity. China is a major player in Grenada They are enhancing Grenada’s infrastructure with social and cultural necessities like a modern sports stadium. France’s only claim is the lingering
names of a few streets and villages. Grenada is a unique experience for those interested in exploring the beauty of the
Caribbean islands. There are many five star hotels, beautiful upscale homes to rent for large groups, as well as affordable guesthouses.

For more information, contact the Grenada Board of Tourism:
www.grenadagrenadines.com