MARY IN THE MIXX: Surviving the Chicago Teacher’s Strike, The Westside Gets a Facelift

This year has raced by us like a squirrel chasing a nut, and winter is upon us. As we put away the light jackets, open-toe sandals, cute linen suits, and break out the coats, scarves, and gloves–we must not forget gala and holiday party season is in full-gear.

It’s no secret that I’ve been in the music and entertainment business since the CTA super transfer–for most Chicagoans over 40 this means ‘a long time.’ A close project I’ve produced for the past 15 years, the Global Mixx Music & Film Forum has become one of the best resourceful entertainment conferences in Chicago designed to empower aspiring talent with information on the music, media, marketing, and film business. We’ve been blessed to have Grammy award-winning creators such as Kanye West, Common, NO ID to NAACP Image Award winners, filmmakers Coodie Simmons and Chike Ozah. This year, we’re proud to have a Bronzeville Life as a media partner and the support of The Chicago Defender Charities to be on board for the thirteenth conference.

For the past few weeks, we have witnessed the showdown between the Chicago Public Schools, Mayor Lori Lightfoot, and the Chicago Teachers Union regarding an inevitable labor strike. The concerns of CTU over the summer were not a secret, and City Hall insiders hint Mayor Lightfoot’s team was not surprised at the vote to go to the picket lines. The concern for many is how long this strike could drag out with $38 million in a yearly increase, becoming the ‘deal-breaker’ for teachers, faculty, and members of SEIU Local 73 returning to work. They are not holding back–they want everything and then some.

Although CPS was preparing for a strike, it rumors circulated it wouldn’t last for long–some insinuated ‘a week at best.’ It was conveyed to the press by the mayor’s team, this union strike was payback for CTU’ mayoral candidate-of-choice, Toni Preckwinkle not taking over where Rahm Emanuel left and this was a tantrum-like alternative. But, as both sides have determined, it is much deeper than political bantering–it has more to do with how previous mayoral administrations have pushed back the educational priorities of CPS students and resources.

What we have noticed out of the long nights of negotiations at Malcolm X College, CPS senior executives, also former educators are conscious of the demands of CTU, and both sides have been respectful not to slam the process. Could it be because we’ve seen mostly women of color working out the details and the bureaucratic red tape? While CPS students are losing key academic eligibility at high school sports programs, PSAT exams, and possible scholarship loss–charter schools are winning. Students at the Charter schools, also partially funded and regulated by CPS, are still in session. CPS CEO Dr. Janice K. Jackson and her team face pressing tasks of cleaning up the collateral damage once the deal closes with CTU. Let’s remain prayerful by the time we go to press–students, teachers, and support staff will be back in the classrooms.

The city continues to push the needle forward on the neighborhood opportunity grant investment by partnering with banking institutions such as BMO Harris, who committed $10 million in small business investment on the Westside. Last week, a group of community stakeholders and policymakers packed the space at L’ Creations along with Mayor Lightfoot and executives from BMO Harris to announce the bank’s multi-million contribution to revitalizing the Chicago Ave. Corridor beginning from Austin Ave, and heading east. Some familiar faces in the building included City Treasurer Melissa Conyers-Ervin, Alderman Chris Taliferro, Alderman Emma Mitts, Alderman Michael Scott, Jr.; CEO of World Business Chicago Andrea Zopp; Rev. Ira Acree and various business owners. Remarks from United Way’s Jose Rico mentioned the $10 million gift would add to the $25 million Neighborhood Fund to benefit organizations such as Austin Coming Together. Making his first public appearance as the city of Chicago’s newly appointed Commissioner of the Department of Planning, Marcus Cox addresses his commitment to overseeing the process to work with everyone across the various neighborhoods to build economic empowerment.

“When we make this announcement, we must come to the Westside,” says Mayor Lightfoot.

BMO Harris’s contribution is a refreshing and encouraging change for many who have called the Westside home for decades. With communities such as Austin, Lawndale, Garfield Park, and West Humboldt Park–limited resources to quality full-service grocery stores similar to Mariano’s and Jewel force residents to bring their dollars to neighboring Oak Park or Forest Park. It’s not enough to accept Sav-A-Lot or Aldi as the only retail choice for Black consumers but for communities to grow and flourish–monies must circulate back into the areas where taxpayers reside.

I’m All The Way Up

Shout out to ComEd’s senior executive Melissa Washington, recently promoted to Senior Vice President of Governmental and External Affairs. In her new role, she will lead legislative affairs, external affairs, large customer services, and economic development for the company. She also will oversee ComEd’s relationships with civic and charitable organizations.

Also, Diana Sharpe, currently chief of staff to the CEO Joe Domingez, is being promoted to vice president of economic development. Two amazing women who continue to strive for being the best in their fields and never breaking ranks from giving back to the community.

The Black United Fund of Illinois, Inc. appointed TBT News Publisher, Carl D. West, as Chairman. He has served on the board for years and will be stepping into the role of overseeing various ways of helping Black-owned businesses having resources to capital gain and investment.

State Senator Toi Hutchinson announced her departure from not seeking a sixth term. Governor J.B. Pritzker recently appointed Hutchinson to a newly created position as Canibus Czar of Illinois. She is a favorite among state legislators and well-liked in the 40th District among her constituents, which serves the South Surburban region. She and her team will have their hands full as recreational marijuana becomes legalized in January 2020. Congratulations on this next chapter in public service. 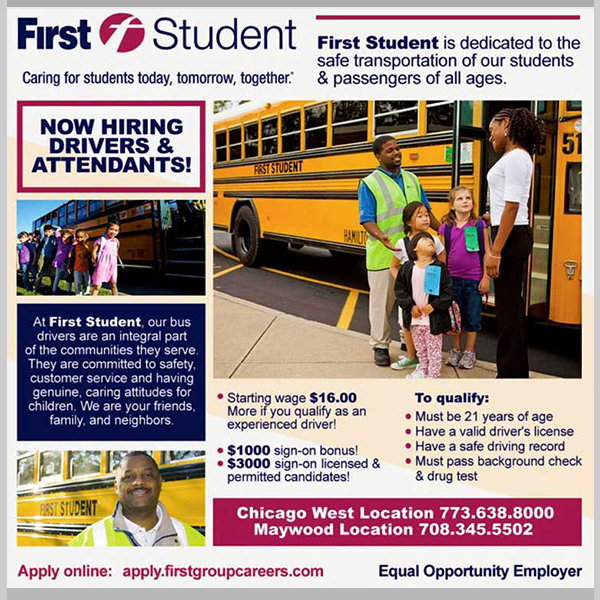