For the past 13 years, Chicago television viewers have become familiar with the charismatic style of Valarie Warner. Her debut in 2005 as the traffic reporter for the WGN morning news team where she was seen by millions hovering over the city. Five years later, she agreed to audition for a new job which would change the course of her life.

In 2010, Windy City Live premiered on ABC 7 to give viewers original programming highlighting ‘all things Chicago.’ Replacing the Queen of Talk, Oprah Winfrey who held down the 9 am morning slot for nearly 30 years. Ironically, it would be the same television studios which launched Winfrey’s AM Chicago four decades earlier.

Chicago television viewers were in for a treat with the new unveil featuring Warner and co-host, former sports reporter, Ryan Chiaverini.

“I knew Oprah was leaving and had heard rumblings that ABC 7 would be starting a local talk show. I had no interest in auditioning. I did not think about it, and it never crossed my mind. I always considered myself someone who stayed neutral. That was my job, I tell people’s stories, and you formulate your opinion,” she says.

At 45, Warner is enjoying the eighth season of WCL and shows no signs of slowing down.

“It has been a wonderful opportunity, something I wouldn’t have foreseen. It’s a blessing to be here in this spot with my ABC 7 family. I call them my second family and to be accepted by Chicagoans in this seat. It’s been unbelievable.” 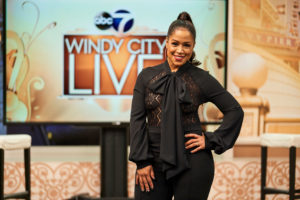 What makes Warner ‘around-the-way’ demeanor put Chicagoans at ease is that most natives mistake her as one. That’s not the case. Warner hails from South Central in Los Angeles where she experienced a bi-coastal upbringing between her parents on the West Coast and spending most of her holidays with relatives in Chicago.

The WCL co-host has a natural ability to adapt and blend into everyday topics of human interest from her time growing up in a neighborhood notoriously known to the mainstream for their gang rivalries; vintage, hydraulic low-riders; and gangsta rap during the 1990s. Warner knew despite the social economic and growing tensions in the African American community, she also felt there were positive influences in her upbringing.

“I used to walk to the corner store for the pickles in the jar and the penny candy. I was right there in the thick of everything, but I was never afraid. I went to school in Playa Del Rey. Even though I grew up in the hood and my church was in the inner city,” she said. “I went to school near Marina Del Rey and where Loyola Marymount University located along the beautiful Pacific Ocean. But, part of my growing up in South Central is what kept me so grounded.”

One day a visit from veteran journalist and KCAL 9’s anchorwoman, Pat Harvey to St. Bernard Catholic High School would plant the seed for her love of journalism and communications.

She recalls being encouraged by her parents, “At that time, I didn’t know what I wanted to do maybe acting. Afterward, I ran home and told my mother, I am going to be a reporter one day. I told her, ‘it would be great, and no two days are the same.’ It sounds fun, exciting and excited.” she said. Warner knew she loved the art of storytelling and grew up listening to her father master the craft.

“I felt my calling was going to be a report or anchor, someone who told stories, someone who kept people informed. Someone who was able to talk to people could get the tough interview and fun ones. My dad would tell me a story, and I would want to hear again and again. I love hearing stories about I also like telling stories. I also love talking to people.”

Her climb would not be an easy one. She would work at WEYI TV in Flint, Michigan, eventually becoming the evening anchorwoman for the news program. By this time, Warner was married, the mother of a toddler and was trying to salvage a rocky marriage. What looked like the idea American dream to outsiders, was a struggle to keep it together every day as she took her seat at the anchor desk. 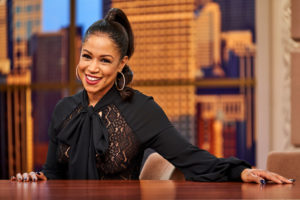 One weekend, she and a colleague decided to attend the regional conference of the National Association of Black Journalists (NABJ) being held in Chicago to connect with other professionals.

It was there where she had an opportunity to meet the person who would help change the course of her professional career. After a day of meeting veteran journalists and HR reps at the NABJ conference, she was invited to return to WGN’s booth. Then- evening anchorwoman and Emmy award-winning journalist, Allison Payne was holding a one-on-one critique session with rising talent.

Warner remembers their meeting. “She calls me from the back of the line. She pops in my tape and tells me, ‘You have to give me this. We have a position open, you would be perfect for this and I don’t see why the network doesn’t look.’ She gave me a complete reaction from the other stations I had stopped by. She believed in me, whatever she saw on that tape, she thought I was worthy to be in Chicago then.”

The following week, she receives a follow-up call from Payne who showed her air-check to the station manager. A meeting was set up to fly her to Chicago for an official interview.

“I had a big issue at home with my marriage. My good girlfriend takes my daughter because I cant miss this interview. I end up missing my flight, and I buy another plane ticket to come to Chicago. My sister picks me up from the airport, I’m a mess crying, so we stop in the McDonald’s near WGN. I’m changing, and she tells me to pull it together, go in there and kill it. I go to the interview, and no one knows I had the worse morning ever.”

She nails the interview and is offered a position at the station.

Feeling confident and refreshed for a chance to relocate to the number three market—she found her bosses were not as happy to release her from her contract. But after months of back-and-forth contract negotiations and a little stalling—Warner was able to accept the position in Chicago to begin her next chapter in her life.

The Move to Chicago

Having family in Chicago and a stable supportsystem—made a move a fluid transition in more ways than one. Now, a mother of two and making the decision to separate from her husband—Warner was not looking back. The responsibility of raising her two small children was her number one priority.

It was one of the easier adjustments, being close to her family and grandmother, Mother Dear. The times spent during holiday breaks in Chicago and visiting Mother Dear in her Chatham apartment were priceless. Warner says one of her Chicago memories as a teenager is riding on South Lake Shore Drive with her sister and brother-in-law listening to Color Me Badd’s song “I Wanna Sex You Up.” Back then, the ‘90s hit song’s track was contagious and resonates in her head till this day.

It wasn’t about the lyrics but the vibe of that era.“That song defined my time in Chicago out of all the songs. Not to toot my own whistle, but that’s one of the things people see in me is that ‘Val is Val,’ she doesn’t know any kind another way to be.’ That’s real,” she laughs. 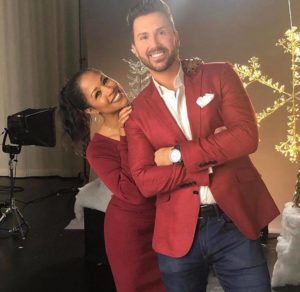 To move from the helicopter chair guiding Chicago commuters on the traffic routes to sitting at the roundtable with some of the most interesting people of our life is a dream come true.

Throughout her time on WCL, her co-host, Ryan Chiaverini has become a close friend, family member, and brother. The pair’s on-air partnership targets a cross-generation mix of people various backgrounds with the primary topics of discussion—centered around Chicagoans.

“We pinch ourselves. Ryan and I are in such a groove. It’s evident to everyone and in the studio audience. We’re close, and we can almost finish each other’s thoughts. He is Uncle Ry Ry and supports my kids and me.”

She smiles, “An instrumental part of our success is our natural chemistry. We’re both from Southern California; we have a lot in common and at the end of the day—time has been on our side.”

Despite the move from 9 am to 1 pm, WCL continues to hold their ground competing with ‘baby daddy’ DNA tests, soap operas and reality style courtroom dramas. Warner is continuously in high demand with speaking engagements and has deep ties to the community. She maintains a busy schedule and is often hosting everything from the Chicagoland Mom Squad meet-ups to black-tie dinner galas and fundraisers. She and Ryan are no doubt household names in the Chicagoland region.

With her success and challenges, there is no comparison to the joy of being a parent. It is one of the deep connections which resonates between her and loyal viewing audience.

“Those two little roommates of mine–I don’t have babies anymore. Zoey and Max have grown up on this show. Max was three and Zoey was eight when I started on WCL. Now, he’s 11, and she’s 16, and she’s going on college visits. That is my number one job, I have to make sure I raise two responsible human beings. I have been really blessed and their pretty cool kids. They understand they have a single mom and their dad is here in Chicago. I love talking about them and sharing their stories. I love that, and I embrace that.”