The Purpose of Peter Jericho

In a word, Peter Jericho is humble. We met up with the early 30-something-year-old self-proclaimed Cameroon Boy at “Harold Green Presents: Flowers for the Living 2019” event at Hyde Park’s The Promontory. The rising star is a little nervous about his performance later that evening but surprisingly calm. Right away, you notice something different about Jericho. He’s not like most artists; He’s calculated, meticulous and driven toward making real music that promotes black excellence. “I could just go cut R&B records all day, and hopefully, one pops, or I could have a purpose, and I feel like the purpose is a lot bigger than I am.”

That purpose is to build a bridge between the African culture and the African American culture through his music. “I want to make sure I encompass that I am American, but I lived in Africa, also… I think there’s a lot of misunderstanding and misconceptions… one might be better than others, or one has suffered more than others. I just want to add that our connection is that we’re all the same people and we’re fighting the long battle here.”

His latest single “Influential” ft. Jabal is an uptempo dance anthem that celebrates the accomplishments and influence that Africans and African Americans have on the world. Jericho and Jabal lace the verses and chorus with a powerful blend of French, 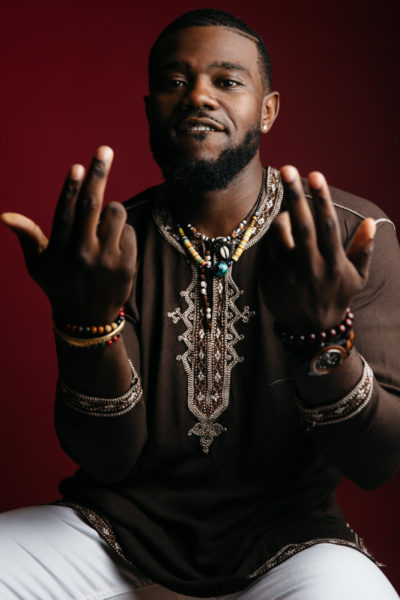 English and pidgin chants. He calls his music Afrobeats, a music genre which involves the combination of elements of West African music styles with American funk and jazz influences, with a focus on chanted vocals, complex intersecting rhythms, and percussion.

“My music is pretty much a reflection of my travel and the places I’ve lived and basically all the influences I’ve had over the decades,” he said. “I feel like you get a little bit of everything out of me because there’s nothing that necessarily holds me down. Right now, I’m a little bit more tied to the African sound because it’s a necessity. I think I made a point at one point in time that I wanted to be surrounded by Black music, so, whatever resonates with me as Black, I wanted to be a part of that.”

He has lived some of his life in Cameroon, West Africa but was raised on Chicago’s West Side. His first memory
of singing was at the age of four. He began singing, like most of the R&B greats, in church, where he developed a profound appreciation for soulful harmonies and instrumentation. Music was in his blood, as both his parents were active members of the church choir. It wasn’t until a trip to a local barbershop during his college years in Vancouver, Canada that Jericho, when pushed by the well-connected barber to sing in front of his clientele, that he would take his first steps down the path of his
destined profession.

With roots stretching from Cameroon to Chicago, Jericho finds refuge in writing music and performing on stage. In the past few years, Peter Jericho has amassed an impressive body of original recordings in both English and French – both languages he speaks fluently. As a singer-songwriter, he’s worked with various noteworthy musicians, including Grammy Nominated singer Glenn Lewis, Tony Toni Tone, Ray-J, and Kardinal Official, and producers 40, Nottz Raw, The Vanguards, Charlie’O and Boi1Da, to name a few.

Signed to Audio One Media Group, a Chicago based entertainment conglomerate that collectively has sold over 20 million units with artists like Cardi B, Lil Durk, Chief Keef, Keyisha Cole, Twista, Cee Lo Green, Faith Evans and Syleena Johnson, Jericho reveals working with this label is a perfect fit because they allow him to be himself and continue to help promote his purpose.

“They [Audio One Media Group] gravitated towards me because of my sound,” he said. “I’m thrilled to be with them because they get me and my music.”

Jericho is minutes away before going on stage, and he reveals that before his performances that he’s addicted to the cough drop Halls and usually takes a shot of cognac— not two because he may forget the lyrics—to calm his nerves. What you may not know about Jericho is that he’s a fantastic basketball player, loves to dance, the happiest when he’s making music and traveling, recently married and a huge fan of “love.” “Love is somebody that always has my best interest,” he said.

When asked what we can expect to hear on the upcoming debut release, Jericho admits to working with Chicago rap legend Twista on a new song and leaves it up to the music, “by following the melody, and portraying the real events and emotions that I have experienced in my life, which I’m hoping will allow the music to gain relevance across generations.”

About the Author: Lenox Magee

Lenox Mage is Web Editor and Staff Writer with Bronzeville Life. In addition to being co-host and executive producer for "The Sip" podcast, Lenox loves hanging with his dog Dempsey and listening to Coldplay.