The President of MGPG Events, Green has an impressive career in media and marketing over the years during her time as a producer at WOKR TV in Rochester, New York and later the producer for the nationally syndicated television show, Ebony Jet Showcase in Chicago. She joined V103 as the Promotions and Marketing Director, hired by then-station General Manager, Barry Mayo to build the new station’s brand image.

Green remembers their strategy, “We started to create the events for the station, not only for the listening audience but for the station to help them bring in revenue. So, years later, we were involved in a local expo, and things did not go very well. I told my bosses, ‘I could do this. We should do this based on our listening audience.’ We could do this for our female audience—for Black women, and we created ‘An Expo for Today’s Black Women’—25 years ago,” she says.

During BWE’s earlier inception in the early 1990s, events such as the traditional Black Expo was a mega marketplace for Black vendors, businesses and consumers. Corporations weren’t involved, and the disconnect between the various levels of African American consumers were falling in between the cracks. Green and her team went out in the streets and discovered people wanted a platform to discuss what was important in the community.

“People said we need you to talk about various issues. Health, wellness, parenting, racial profiling and they wanted us to talk about these topics because we didn’t have the public service programming for this,” she remembers.

“My idea was to address this in one event based around workshops and seminars. We do about 50 of them throughout the weekend. We not only come up with these ideas ourselves, but we formed an advisory committee of women to help us create and develop what we should talk about.”

At the time, one of their hot topics was how North suburban Highland Park Police used racial profiling. “We did a town hall meeting, and Dick Gregory used to come to town and head up those issues. That’s what the women wanted in the beginning. Then we created around that with the exhibit floor, corporate sponsors and helped us have this event,” she said. “Having them there kept it available for small businesses to be a part of the expo. Last year, we had almost 300 exhibitors as well as this year.”

Growing up and Motherhood

Green and her five siblings moved from Nashville, Tennessee when she 10 to Rochester, New York. Her mother raised three boys and three girls on her own without missing a beat. She remembers her strong-will and encouragement.

“She didn’t believe anything wasn’t possible. She kept us, worked and we had the best that she could give us. My mom helped us go to college. My youngest brother was the last one in the family to attend school and attended Brown University with the Kennedys. My mother found a way to get the support, but she always believed we could do anything we wanted,” said Green.

“One of her favorite sayings, ‘Just put one foot in front of the other and keep going.’ Sometimes when it gets rough, and it does. There are ups and downs with anything we do. I remember, my mom would continue to push me, not in an ugly way. It was through watching her; I learned how to survive.”

Being a single mother herself, Green attended Rochester School of Technology while raising her three boys. In November 2018, she received the sad news of one of her sons passing away. 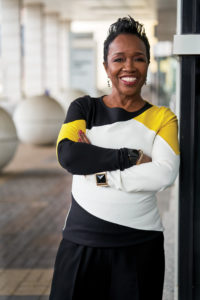 “It’s tough for me to think about it. I had three sons—I still do. I know he’s somewhere looking down. I went to school at night and worked in the day. I had no car, and I remember having one on my hip and one in the stroller taking them to daycare. It wasn’t hard, and it was just what we did,” she recalls.

Throughout the last two decades, the female inspired event has been faced with some significant challenges in maintaining their foothold in the market. Management changes and priorities shifted with the expo’s primary radio partner resulting in a temporary name change to Uplift Chicago in 2007. It proved to be one of the expo’s lowest attended year along with a challenging recession to follow.

Hearing her mother’s voice in her head, she persevered. “There was a period when the show was in transition, but folks would ask, ‘You produce the Black Women’s Expo, right?’ So, when it was time to come back, we tweaked it to Black Woman’s Expo. That’s what people called it, and that’s what they remembered, and we haven’t looked back.”

We asked Green, would they have been able to make such a significant impact in another important city besides Chicago?

She answers, “No, I don’t think so. I think it was Chicago; it’s is an incredible and dynamic city. Even back then, there were more entrepreneurs in Chicago than in any other town. There are other cities, like Atlanta that is next to rival all of that. We’ll be hosting our expo there September 14-16 this year.”

Without missing a beat, Green and her staff prepare nearly a year out to ensure their sponsors, vendors, venue partners, and media partners are committed in advance. In addition, she has seen a dramatic increase in entrepreneurship, especially among Black women.

“We were having a problem finding vendors back then; now it’s off the chain. Any new idea, we’re involved with that. Right now, the natural hair industry is exploding. We have a beauty boutique where we’ll do demonstrations for clients. We sent that a month out. The incredible response we received on a national and local level are from people who are starting these businesses in their homes.”

Green says for the weekend, returning and new attendees can expect much of the same hustle and high energy. This year’s title sponsor is BET Her along with R&B recording artists, Eric Benet, Glenn Jones, J. Brown and Leela James performing throughout the weekend.

African American women have shown their buying power and brand loyal in a trillion-dollar consumer-driven market. What keeps the Black Women’s Expo relevant and fresh for the next generation?

She smiles, “I’m always surrounding myself with folks younger than me. We have an office full of millennials who are creative and energetic. I’d steal a lot of that in terms of my energy in doing what we do. It takes that, and it’s not easy. People think we have a staff of 20—we don’t. It’s generally a staff of five to six staffers leading up to produce the show. The more people you have, the more people you’re falling over. Get the right people, the right creative minds, the right skill set, and the right energy you can do whatever you want to do.”

For schedule and tickets, visit: www.theblackwomensexpo.com