Life and Taxidermy of CARL COTTON 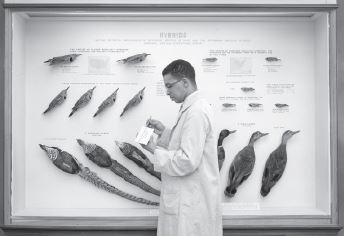 n recognition of Black History Month, a new exhibition at the Field Museum will honor Carl W. Cotton’s legacy and celebrate the accomplishments of this unsung African American artist. Featuring taxidermy, interviews, archival footage and images, A Natural Talent: The Taxidermy of Carl Cotton will open at the Field in the T. Kimball and Nancy N. Brooker Gallery on January 31, 2020 through October 4, 2020.

Born in 1918, Carl grew up in Chicago’s “Black Belt,” a section of the South Side that confined most of the city’s African American population. This community was fertile ground for a thriving cultural scene. Cotton’s contemporaries included famous artists, musicians and writers like Charles White, Margaret Burroughs, Nat King Cole and Gwendolyn Brooks among others. Chicago historian Timuel D. Black was also Mr. Cotton’s childhood friend and peer as an adult.

Carl, too, was an artist—though an unusual one. He was fascinated by preserving animals from an early age and developed his skills working on the “wildlife” of urban environments: squirrels, birds, and even family pets, endearing the neighborhood in his unofficial role of community taxidermist. 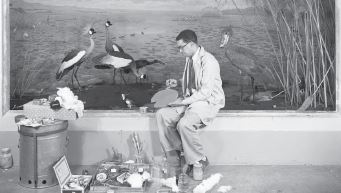 ©1953 Field Museum. Carl W. Cotton puts the finishing touches on the lily pads of the “Marsh Birds of the Upper Nile” diorama in 1953.

Following his service in the US Navy during World War II, Cotton’s talent and passion led him to the Field Museum. Carl holds a unique place in taxidermy history. As the Museum’s only African American taxidermist, one of few in the museum industry, he studied under some of taxidermy’s greats, including Leon Pray and Leon Walters for almost 25 years. He bridged taxidermy’s “Golden Age,” begun by Carl Akeley, and the modern era of diorama making.

On staff at the Field Museum from 1947 until his death in 1971, Cotton specialized in birds. But, unlike a typical taxidermist,he was also talented in mounting mammals, insects, reptiles and fish as well as recreating their environmental elements. His most famous work—“Marsh Birds of the Upper Nile” — and other examples of his artistry are still on display throughout the museum.

Visit the Field Museum to learn more. Members and Illinois residents with proof of residency can enjoy free Basic Admission to the Field the entire month of February during Free February 2020.