The history of our ancestors runs deep and the influence of those who came before us can leave a lasting impact on our lives. Cook County Board Commissioner Donna Miller is a living testament to her family’s roots in Chicago. Her family has had a long and rich presence in the Bronzeville community during the turn of the 21st Century and is rooted in public service.

Since being elected in 2018 for the 6th District County Board seat, Miller is one of seven suburban county board commissioners serving the growing south suburbs. “I feel very close to Chicago, especially Cook County. That’s why being a Cook County Commissioner is so special to me, I don’t think many people could say—Black or White that their family is originally from Chicago for five generations,” she explains.

“My great-grandmother lived at 49thand Vincennes and she was a precinct captain,” Miller recalls. “Everyone in my family was involved with helping the community. My grandmother was a teacher in the Chicago Public School system. She created the Department of Learning Disabilities and was legendary at CPS for that because it didn’t exist in the seventies. My grandfather was the only Black psychiatrist in Chicago at the time. He influenced many physicians, trained residents where he worked at Cook County Hospital and UIC for 40 years,” says Miller.

This sense of community is what surrounded Miller in her childhood—a sense of duty and responsibility. She would carry her interest in civic engagement to Howard University where she graduated and would eventually intern for then-Senator Allen Dixon for two years. Straight out of college, Miller was offered a junior staff position on Capitol Hill but would soon learn the salary would not provide a sufficient living pay wage. Although she would pursue another career—Miller would continue to volunteer for great causes including a summer with the Red Cross, working eight hours a day in their hospital. Little did she know, it would become a great training ground for her current position as county board commissioner.

Over the last twenty years, Miller would work in the pharmaceutical industry, marry the love of her life—David Miller and they would have two sons settling in the south suburbs. David served for 10 years in the Illinois House of Representatives for the 29th district. Being a working mom and wife, Miller found herself actively involved with community activities and forums along with understanding the public duties of
her husband. 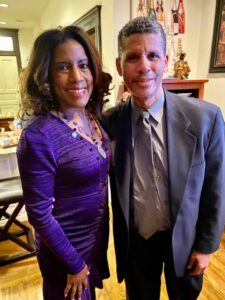 She admits, that her interest in running for public office was fueled by several reasons. “It was a combination of everything. My husband was a dentist, not a politician in the beginning—it just happened. I was influenced earlier because I was always around it (politics) by volunteering and looking to help those run for office.
I would attend community forums including one I attended where there were some county officials discussing the healthcare and the hospital system and they couldn’t answer some pertinent questions regarding the administrative process,” she recalls.

When the seat in the 6th district became available by then-appointed Cook County Board Commissioner Edward Moody, Miller says it was the best time to run for the office. “My professional career is in healthcare. Being in the healthcare industry, I have a focus on these healthcare disparities, especially in Black and brown communities. I’ve seen it firsthand on a global level, working for global pharmaceutical companies where our mission was bringing good medicine and
therapies to people,” she said. Miller admits the resources don’t always reach the people these services need to touch especially during the pandemic.

“We see these disparities glaring because we need to focus on prevention,” she says.
The county’s 6th district is large and vast stretching from parts of Alsip, Dolton, Orland Park, Palos Heights, Park Forest, Lansing, Justice, Tinley Park, Dolton, Matteson to Lynwood and many other municipalities in between, bordering the
Indiana state line.

“Logistics matter because people forget how big the south suburbs and suburban Cook County is. My district is 120,000 square miles nearly 77,000 acres—that’s one district. Whereas a city commissioner’s district might be five square miles, it’s densely populated. Because of that vast difference of one community to another—how do we link the communities,” says Miller. 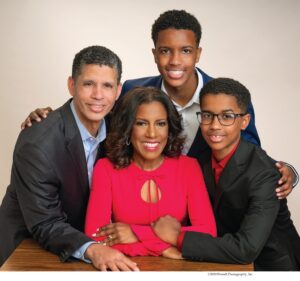 Miller is running for re-election, shedding her freshman status, and joining a handful of board commissioners running unopposed. She is more determined than ever to be there for her constituents and to encourage others who seek an interest in public service or to become more active in their communities.

“I’m all about issues. You must be issue-based and intentional. That’s the good thing about the diversity of the people who are on the county board. We all have different focuses, that’s what makes our expertise much higher. If you’re thinking about running for the park district board because your kids don’t have a park—stick to your issue and rally people around it because other people may be concerned about it as well. Be a vocal advocate.”