Pharris Thomas is not your typical DJ. What started for Thomas nearly 40 years ago in a similar fashion to other DJs from his peer group—ended up carving a specific single lane designed by him.

As the premiere on-air personality at Chicago’s Power 92.3 radio station, DJ Pharris has become a dominant force introducing new music and helping to launch artists to stardom in the rap music game. His meticulous ear for what’s hot and what’s not— has landed him in recording studios with some of the industry’s hottest talent receiving an exclusive listen before it’s publicly released.

Growing up on the Southeast side, Thomas attended Hyde Park Career Academy in the early 1980s where he would often travel between Louisiana and Chicago.

“That’s funny. Djing was an accident. It happened when I was living at Grambling University. My uncle was the assistant band director, and I used to go down there often because I played instruments as a kid. I played trumpet, upright bass, and I also know how to read music,” he says. “One day, they didn’t have a DJ, and my uncle made me DJ my cousin’s party. It was a regular turntable out of the house. From there, I had my friends send me mixes from the radio down to Louisiana.”

Being bit by the bug, he eventually put down the bass having friends send him radio mixes from WBMX.

“I used to go to many parties at The Playground where Farley would play. Those were the guys. I danced a lot, and I sat there at the DJ booth, or I stood outside to study what they were doing. I never knew about Technic, but they looked fancy. What is that thing with the lights on it?” he laughs. He said, “The rest was history.”

While he gradually built a name around the high school circuit DJ’ing and playing House music—he said he was fascinated by hip hop music when it was considered taboo to play at the time.

He says, “I was traveling to the East Coast a lot. I had friends at Hampton University. I went to their parties, and they were playing rap and Go-Go music. I would think, ‘This is dope.’ The parties were turned up. I would go home and tell my people about this rap music. No one would want to hear what I was saying. I would buy rap music as well, and at the end of House parties, I would sneak in a rap record at the end, which eventually got me banned.”

Thomas said it would lead to him not being booked by Chicago promoters for nearly three years, where he would practice his skills at home where he shared an apartment with his friends. While they would be smoking and playing cards, Thomas would be in the other room playing rap music. 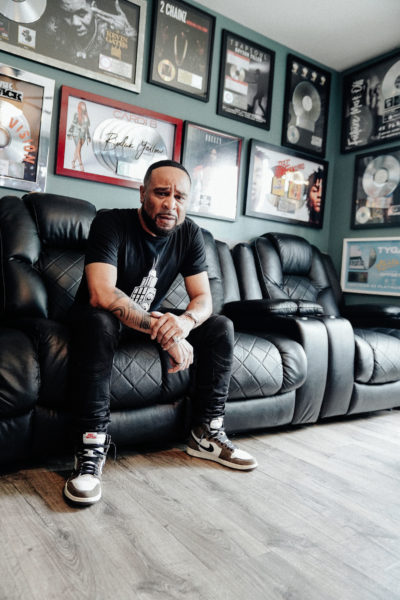 In 1992, he would receive a call from Jay Alan who formerly programmed Columbia College’s WCRX and became the newly appointed Program Director of 950 AM. The first all independent rap formatted radio station in Chicago was building their DJ rooster and offered him a mix show on the station. With on-air radio personalities which included First Lady, The Diz, and Pinkhouse—his rap mixes would become the catalyst for the station’s signature sound.

The station would soon be the ‘go-to’ format for breaking new artists on both original and independent labels such as Rap-A-Lot Records out of Houston, Texas. Chicago had become the label’s biggest selling market in the country with artists such as the Geto Boys. With their flair for rapping about street and hood life, it struck a chord with urban inner cities in predominately Black communities across the nation. Jay Alan paid attention to the response and approached him on a new show called, ‘Geto Boy Radio’ dedicated to more hard-core and gangsta rap mixed by Pharris.

“I was against it because I didn’t particularly care for Gangsta rap. I liked the East Coast stuff. I didn’t mess with Gangsta rap. He had to talk me into it. I thought it would give me a bad image and did not want to do it, but it turned out the be the biggest thing to hit radio. It changed my life,” he says.

With the success of Geto Boy radio, it would transform Pharris into creating another lane, giving artists from the West Coast, ‘dirty’ South and the Midwest a platform to break their music in Chicago. Twenty-five years later, the chemistry between the two men has remained steady with Alan’s current role as Operations Manager at Crawford Broadcasting.

Reality rap was enormous and often the soundtrack of kids living the street lifestyle of drug dealing, fast cars, women, and gang banging. Since the beginning of record companies, there have been blurred lines between the music world and organized crime—filled with the perception of glamour and glitz—a magnet for those seeking power and fame. In the 1990s, many indie start-up labels would be bankrolled by the streets trying to cash in on the rap craze.

From DJ to Producer

Over the last two decades and numerous awards later, DJ Pharris has become as significant as his famous DJ counterparts—Funkmaster Flex in New York and building his production credits like DJ Khaled in Miami.

Recently, inking a deal with eOne Music, he launched his label, TCMH (This Chicago Music Group) releasing the first single, “Boss” featuring G. Herbo, Young Dolph and produced by Mano. It was a decision he says was long overdue since working on major collaborations with artists such as R. Kelly, Future and Kanye West in the past. 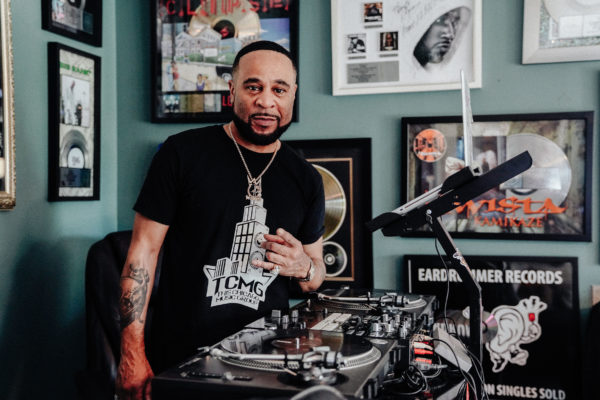 “I’ve always produced remixes here and there. I just had little stuff, and one day I spoke with Rita Lee and said let’s do this because I didn’t trust anyone. I didn’t want to waste my time with it. I had put a project together years ago where I had all of the features and the records done, but it was never put out. It was with an independent label and the label folded,” he says.

Thomas recalls his involvement with working with Kanye West on the single, “Mercy” and how that experience influenced him.

“I helped him arrange that song. The hottest part of the record is the part that I told him to do with the Reggae sample. He had it at the beginning of the record, I told him, ‘Hey, try to put that on every hook.’ When he did; that man damn near hit the ceiling and screamed, ‘That’s why I brought you here to work with me! Yes, yes, yes!’ From there, I knew I could do this on all levels,” he says.“He was so proud of that record, every artist that came through, he would play them that record. He hadn’t even finished it yet but just the fact of that hook and putting that sample in that hook, gave it so much energy—Kanye played it for everyone, and they always danced when they heard it.”

Chicago has produced some of the best music in the world ranging from Blues, Gospel, Rock, House, and Hip Hop grooming great young talent. However, Thomas says what prepared him in his current role is his love for all genres of music as well as understanding the history.

“New artists need to research their history. They need to know where they come from so, they can respect the game even more. I challenge them to get out and learn the history of music and events that happened in their backyard. It didn’t start with rap music. Talk to their mothers, fathers, and grandparents,” says Thomas. When sitting down with talent, his direct honesty is what builds trust.

“Younger artists know they can always come to me for honesty. G Herbo sat down with me and played his entire album. Did I like that or critique this? I will be honest and give it to them truthfully—they respect that. They look at me as the ‘OG,’ and there’s much respect so anything they want to know, they are open to ask me. I’m willing to give them my honest opinion.”

Some of the most successful music producers have either transition from DJing or either becoming a DJ while wearing the producer hat. His process is simple when he listens to new music.

“I knew many producers that only had the concept and brought in the work for hire to put the original piece together. It starts with an idea in your mind, and you being able to take them out and make them a reality—it all starts within,” he explains.

Building His Brand Beyond Music

While many DJs have fallen to wayside lured in by gifts, trips and empty promises by individuals trying to find exposure on mix show radio—Pharris has stayed the course—maintaining his brand beyond the airwaves.

“As a DJ, I try to stay ‘in the know’ and always watch what’s happening in the culture because it’s vital to treat it as a business. For me, it went from a hobby to my real passion–giving it my all and sacrificing. When everyone else is doing something, I had to work and take chances. That’s the reason for my longevity and my passion. It’s not something I do to do it; it was never about money. If that’s the case, I would’ve quit a long time ago. It took time and I’m still not where I need to be.

Over the years, Thomas was one of the few radio DJs in the country with significant sponsorships from corporations including Pepsi, Nike, Under Armour, Cîroc and Effen Vodka. With a large social media following and obsessive love for fast cars, he recently finished a year-long deal with Maserati and will begin with 50 Cent’s new champagne line, Le Chemin du Roi, meaning ‘the king’s path,’. Each bottle features a 14-karat gold-plated emblem resembling the king chess piece.

The father of six doesn’t see any slowdown soon and passes on the same advice to his kids that his mom often would share with him.

“My mother would say, ‘You don’t have to follow in the footsteps of your sister or me—do things the way you want to do it. Don’t be a puppet or a follower.’ Please get out and find something that makes you happy and gives it your all.”