For the past three years, the Chicago Police Department has invested in grassroots recruitment efforts, launching the campaign, “Be the Change” targeting a wide span of individuals considering a professional career with CPD. What initially started under the former Supt. Eddie Johnson’s leadership has transitioned to the current Superintendent David Brown whose mission is to continue community engagement—
meeting people where they reside and thrive.

Veteran police officers, Yolanda Talley who at the time of being interviewed for this story was then-Deputy Chief of Recruiting and Retention, and Officer Daliah
Goree talked with Bronzeville Life about the CPD’s commitment to their recruitment efforts to change the perception of the department’s image. Both women have been on the force for 25 plus years; both grew up on the Westside of Chicago and their initial interest in joining the police force was by happenstance.

Deputy Chief Talley recalls her introduction to the police force. “I was a college student at DePaul University, an accounting major. Law enforcement was not on my radar. One of my friends wanted me to take the police exam with her. The more I learned about policing, the more I wanted to be involved. It was a process.

As an expectant mother studying to become a nurse, Officer Goree had a similar experience with a friend taking the police exam. Unfortunately, her friend failed the
exam, but Goree passed and had a genuine interest to continue her pursuit to join the force.

“When I look back, I know God wanted me to do this. I’ve had negative experiences growing up on the Westside of Chicago with the police. The interaction was always negative with them from what I witnessed in my neighborhood. But, when I took the test and I passed, I ended up seeing the person behind the badge. God always
has a plan and thinks you don’t want that path, but it ends up differently,” remembers Goree. Talley adds, “Be what you want to see. When we do our information sessions, Goree shares her experience from the Westside of Chicago—I’m also from the Westside, but I never had any negative experiences with the police.

We both ended up in the same place and willing to serve our community and it wasn’t on our radar in the beginning.” Building Trust in the Black Community
With rising participation from members of the Latino and Asian communities, the face of CPD is gradually changing and there is a serious decline of Black officers retiring at rapid rates in the last decade. The distrust of Black residents and law enforcement continues to rise as police brutality triggers ongoing city-wide protests among young people.

Talley and Goree hope their presence and others who look like them can educate the positive benefits of the profession. Talley who resides in the Lawndale community
understands the disconnect and wants her success to being the change needed to convince young African Americans to become police officers.

“We know it’s a hard sell with the police and the Black community. We need our people to come in and be a part of this police department if they want to see things differently. If they want to see their communities policed differently, we need to make sure our young Black people are considering law enforcement as a career option,” she sighs.

“We see all other communities coming out in this city, answering the call. When Hispanics come out, they show up deep and we need our people to show up in the same way. We know why they’re not doing it. Others need to stop telling our youth to not do this at a young age. We need to encourage them to join especially if they want to see things done differently in our community,” Talley explains.

To groom new prospects, CPD has two programs— police and fire training programs for high school students who are considering a career as a first responder. They partnered with Chicago Public Schools (CPS) introducing students to both the police and fire departments. There is also a police cadet program where college students are paid to work closely with police officers—taking reports
and answering the phones 20 hours a week.

Officer Goree has become one of the faces of CPD’s recruitment program, traveling around the country and throughout the city working hard to sign up applicants
to consider law enforcement as a career. On any given day, you may run into Goree and her partner, Officer Claudette Knight at a coffee shop, a community college, or
a music festival—meeting and greeting people with a smile and pamphlet. 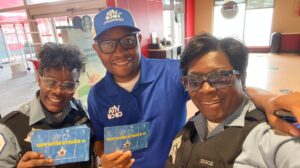 In January 2022, Deputy Chief Talley was promoted from the department’s Recruitment and Retention to Chief of Internal Affairs.

Rising up the ranks in her 27 years with CPD, Talley is a witnessed to the progress for women officers.

“We see the changes being made. We have a lot more women on this job than in the past. We have more women out here signing up, at times more than men
signing up to be recruited. There’s more support nowfrom other women—a lot more to support and mentor and to guide. Yes, the challenges are still the same but
not at the same level. But I have been supported by men and women on the job who look like me. When I talk to young people, I tell them anything is possible. Don’t listen to the naysayers,” she says.