Tameka Jones: Outside the Box Catering and Events, Inc 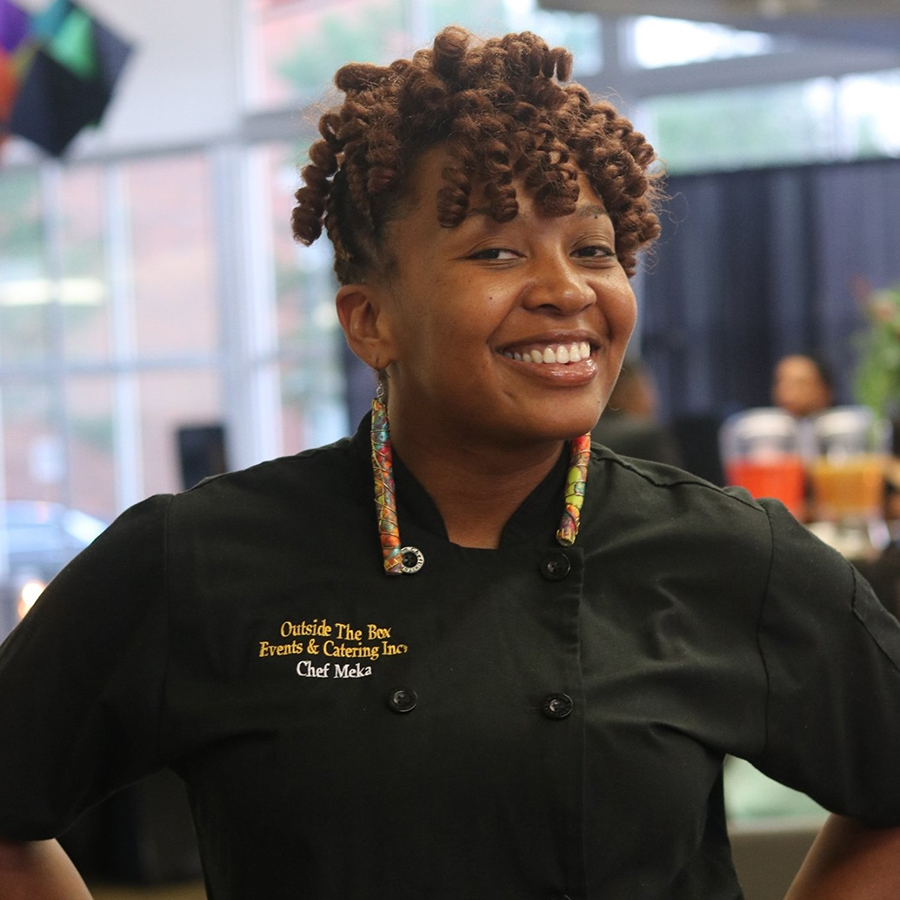 Tameka Jones – Owner of Outside the Box Catering and Events, Inc.

Entrepreneurs who discover something missing in their market, usually find opportunities to innovate. Tameka Jones is one of those entrepreneurs.

Tameka was self-taught at commercial cook. Her love of cooking “soulfully delicious” food started as a child with her mother and grandmother.

Tameka’s first business was a wedding planning business. Over time she eventually incorporated her love of cooking into new catering food options for clients. In addition to running her business, Tameka learned about the food service business.

Between 2014 to 2016 Tameka worked as a server and bartender at nicer restaurants. Eventually she worked as an Event manager for Drinks on Me Catering.

“During my restaurant days, I learned about front of the house operations, but also kept my eye on the cooks at the back of the house in these restaurants. I learned a lot about how they presented food and plated food, and even prepare food.”

Financial pressures of the wedding planning business forced Tameka closed in 2017. While reflecting on lessons learned Tameka focused on one aspect of the business she enjoyed most—food. A close friend suggested she check out the food served at networking events for real estate companies.

Attending these networking events made Tameka aware of gaps in the catering market:

I asked Tameka what thoughts came up for her while attending these events.

Tameka told me she asked herself, “Maybe I can help with a big part of the food. . .Why can’t they just do something that’s a little outside the box?’”

In that moment, Tameka realized that if she went back to cooking it should be a catering focusing on what she liked to cook rather than the way other people cooked.

One of Tameka’s grand ideas for catering was to unite creative tasty cuisines and business meetings. She wanted to provide businesses with the luxury of wowing their clients or rewarding their staff with a few fun and savory cuisines without leaving the office.

“What better way to inspire a sales team than to fill their bellies with soulful deliciousness?” she said.

In October 2018, Tameka launched Outside the Box Catering and Events, Inc. Her business focuses on soulfully delicious food she learned how to cook at a young age. Dishes such as jerk chicken dinners, shrimp with grits and vegetarian lasagna were all on her catering menu. 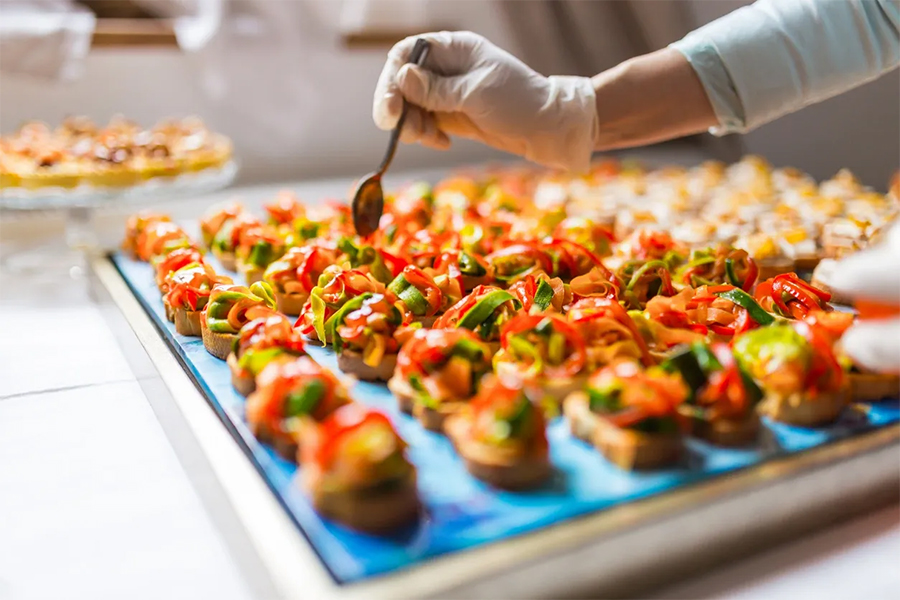 As her business grew, Tameka reconnected with people from past jobs to help her with staffing and cooking. With an as-needed team in place, Tameka’s rapidly growing network spread the word. More and more people wanted their open houses and events to include food they enjoyed from Outside the Box Catering. 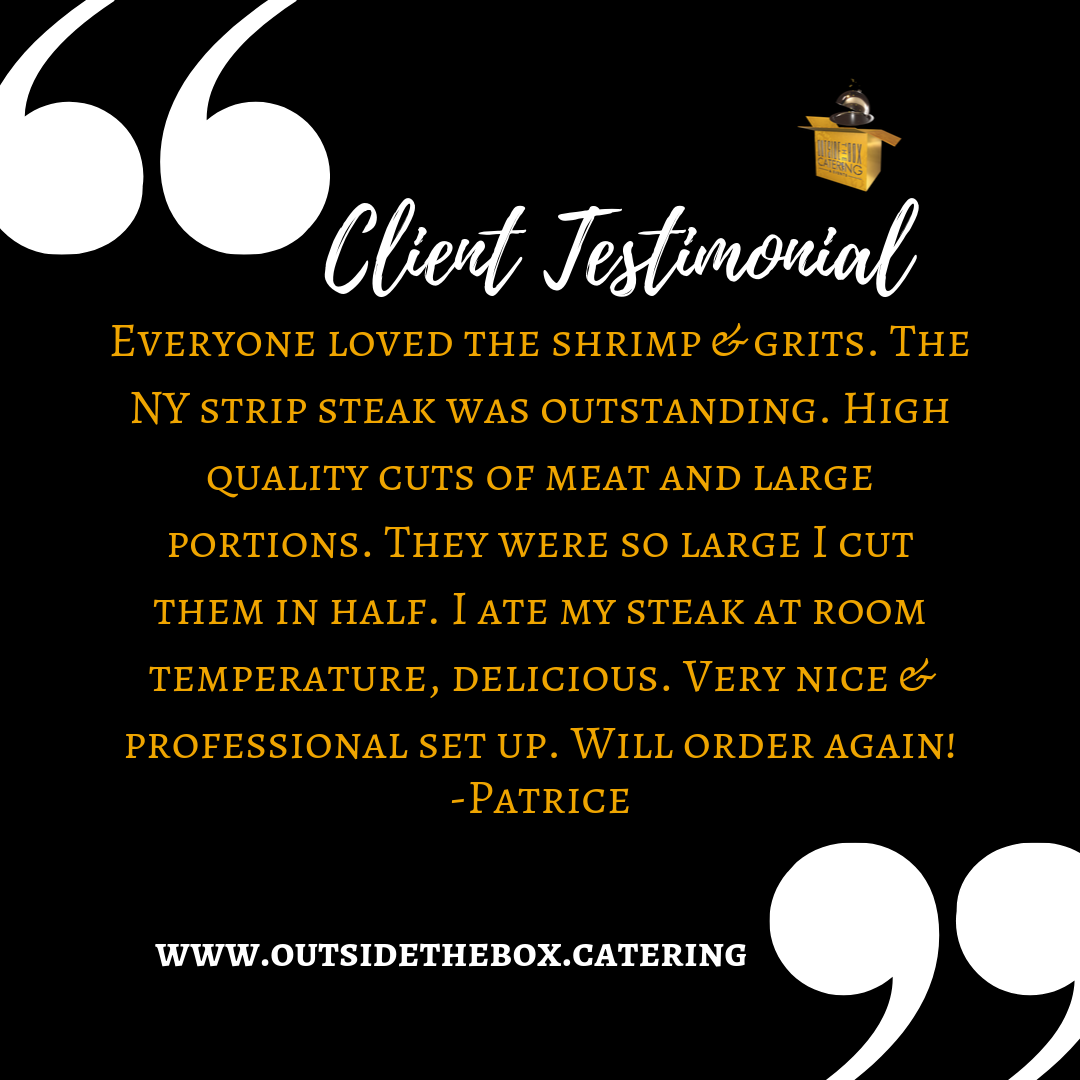 Outside the Box Catering took off. Their food was at Bronzeville Nights, Coldwell Banker Ste. 527 Realty Group in Hyde Park, Avondale and Logan Square.

The large group meals were cooked in a shared kitchen while food for smaller events were cooked in her home kitchen. As her business grew, Tameka realized when she needed to hire additional help, cooking by tasting would no longer work.

In 2019, Tameka had the foresight to take the critical steps necessary to scale her business. The Illinois Restaurant Association provided an opportunity for Tameka to earn all the culinary kitchen credentials necessary to run a safe, commercial kitchen.

“I learned how measure all the ingredients and create recipes so that other people could actually do the cooking,” she said.

When 2020 began, things were going well. Tameka had two events on the books, which quickly got cancelled because they were scheduled for March in Nashville to when COVID-19 began.

In that moment, Tameka told herself, “I have to do something to keep this catering business going.”

She quickly figured out how to create a meal delivery business. When I spoke to her in April, it was just getting started and growing quickly. Today, Tameka has multiple menus for food delivery. 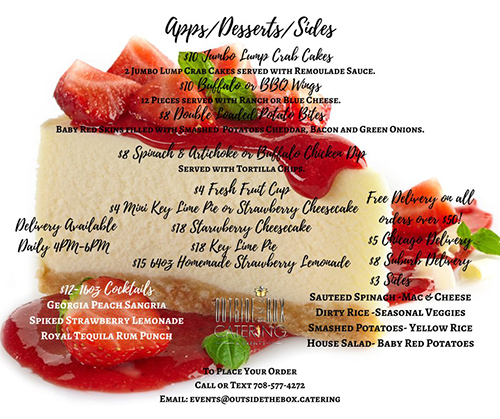 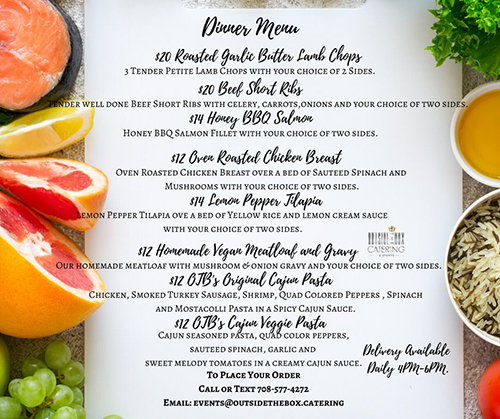 Now, Outside the Box Catering’s business “is booming.” Within a few weeks, the number of customers grew from 360 to over 520. Tameka had to hire more people, and added delivery trucks and vans. 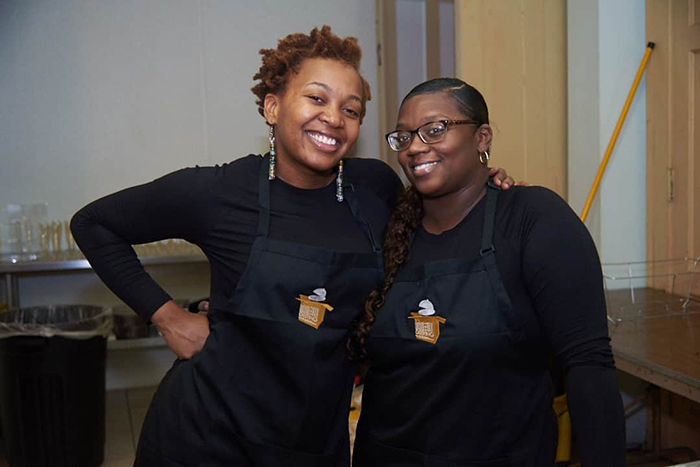 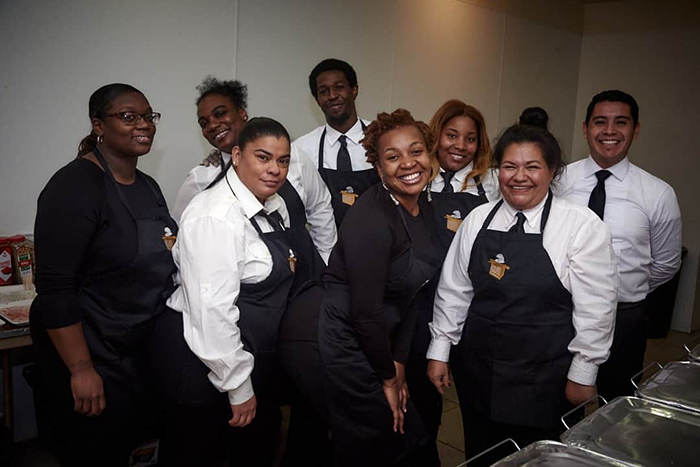 Outside the Box Catering Team

Tameka’s business is expanding so fast she’s ready to build her own kitchen, outdoor dining, meal delivery facility. The Roseland Chamber of Commerce offered to help Tameka realize her vision.

They will fund the build out of the build out the space for Tameka’s business. The location, a former dry cleaner, creates the opportunity for Tameka to increase the profitability of her business.

Building her own facility in Roseland, offers Tameka a second opportunity. When the build out of the building is complete (opening summer 2021), Tameka will be able to provide fresh meals in an area that is now a food desert.

When Outside the Box Catering facility is completed, they will offer meal delivery, catering services, and a restaurant experience that is COVID-19 friendly, while contributing to the community.

“I’d love to contribute to a current food desert by having a fresh food and a restaurant, said Tameka.

Advice to Other Entrepreneurs

Sometimes you feel like you’re being redirected and she said, I realized that the most important lesson I learned is that you should just go with it.

Outside the Box office location is at 444 Westlake suite 1700 and kitchen is in Blue Island.

About the Author: Lynn Miller