Pritzker Is Not Playing, Lightfoot Has A Heavy Backhand

Gov. Pritzker accomplished something that took Bruce Rauner almost his entire term to do—passed a $40 billion operating budget on a bipartisan agenda. This move means both House Democrats and Republicans participated in the process to ensure their constituents did not suffer through another excruciating financial drought. The majority Dem House and Senate didn’t hurt but through this tedious process, both sides rolled up their sleeves and saw it through with lawmakers looking forward to the additional $1,600 bump in their salary increase.

What does this mean for Illinois taxpayers?

Don’t get nervous yet over the price increases, and here’s why:

Description: Allows employees to purchase credit for periods of salary reduction, including furlough days. This bill applies to two Cook County courthouses who experienced a combination of 10 furlough days and salary reductions between December 1, 2017, and November 30, 2018, to pay to switch furlough days into creditable hours for pension calculations.
Action: Signed
Effective: Immediately

To move the fair tax forward, the Governor signed SB 687, which would go into effect if and when voters approve a constitutional amendment to Illinois’ budget in November 2020.

In that general election, voters will have the opportunity to change the state’s constitution and allow for more fair rates, in which those earning more than $250,000 will pay more, and 97 percent of Illinois residents would pay the same or less in income taxes. Illinoisans can find the tax rates for their family at www.illinois.gov/FairTax Calculator. The fair tax legislation also includes a 20 percent increase in property tax credits and a $100 per child tax credit, both of which are phased out at higher income levels.

According to Capitol News Illinois, Senate Bill 689, which included, among other things, a new tax on Medicaid managed care organizations that will allow the state to draw down additional federal matching funds, freeing up about $390 million in general revenue funds for other purposes. It passed by a vote of 107-to-9. 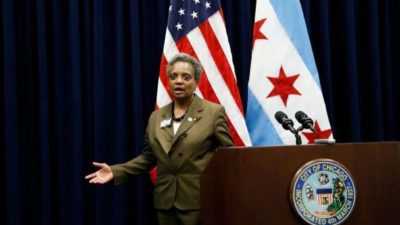 Before Mayor Lori Lightfoot stepped out to celebrate with family, friends, and supporters on the first day being sworn in—she signed an executive order to curb Aldermanic prerogative. It was a bold move but the tip of the iceberg of what would expect as the new administration took over the fifth floor.

At her first City Council session, she the necessary votes to push through her chair committee appointments and quickly ‘hushed’ Alderman Ed Burke and former Finance Chair Edward Burke. The following week, Feds issued indictment charges against Burke who plead ‘not guilty.’ Not impressed, Lightfoot held a press conference demanding his resignation. Keeping in tow of clearing out the ‘Rahm’ appointed CPS school board.

As the administration continues to make appointments fulfilling promises of diversity and inclusion, she made a public show of support by keeping CPS CEO Janice Jackson while announcing her hand-picked choices for the new school board. Her decisions are well-thought out and non-impulsive with a full schedule—she is making the rounds.

The proposal for Landmark Development to build a $20 billion development, One Central would several luxury high rise buildings over the railyard around 18th, and Lake Shore Drive has not been approved by Lightfoot. This doesn’t seem to stop their efforts to try to go around her to push state legislation for $5.1 billion for funding towards a new transit center included in the project which could approve up to ten buildings which could reroute an already congested Lake Shore Drive route for thousands of commuters.

Located in Alderman Pat Dowell’s 3rd ward, there are concerns by residents, which could affect rising property taxes, affordable housing, and an aggressive form of gentrification pushing people further south. The last thing residents and public officials want South of Roosevelt Rd. is numerous protests similar to the Lincoln Yards development without community input and support.