Chicago has become one of the leading markets in the coffee bean business. The king of the coffee world, Starbucks currently operates 184 stores in the Chicagoland area, second to New York City, according to Statista.com.

With consumer’s love for the brew, we have also seen a rise in independently-owned coffeehouses across the city, motivating the most significant coffee to build their latest and most ambition coffee bar headquartered in Chicago.

In November, Starbucks will open its largest location along the Magnificent Mile, in the city’s highest revenue retail corridor on North Michigan Ave. Located in the former Crate and Barrell location, the ambition build-out involves various moving parts in attracting visitors from around the world.

Not many understand what takes place behind-the-scenes to open a corporate retail establishment and the people who manage the process. Chicago native, Kimberly Scott is part of Facilities Service Management at Siren Retail Global Development for Starbucks. One of Scott’s most substantial tasks includes the world’s largest Starbucks on North Michigan Ave.

“My role as facility management, once construction builds a store, operations comes in and stocks the store. I am responsible for ensuring that the store is running every day. We have proper lighting, air conditioning, heating–all the safety mechanisms. Making sure it’s cleaned. I’m working to ensure our internal partners (employees) have a safe working environment as well as our external partners (customers),” explained Scott.

Scott is not new to this neck of the woods; her distinguished career in facility management began nearly 25 years ago at the Chicago Housing Authority (CHA), where she was hired straight out of college.

She recalls, “I graduated from Iowa State University. There at CHA, I was managing, engineers, carpenters, landscapers, laborers at 21 years old.

Working at CHA for seven years, it was there where I learned how to treat people, and how to talk to people. I didn’t recognize my love and passion for the community until much later, but that’s where I got my start,” says Scott.

Born and raised on the Southside of Chicago, Scott grew up in a structured and working-class family where she says education was influential in the household. Her father, Grant Scott, was a former CHA Police Commander and Cook County Deputy Sheriff who believed in community engagement and breaking down those barriers between public authority and residents.

She says as she gradually worked up the corporate ladder at Walgreens is when her parent’s influence became evident in their teachings.

“As the Regional Facility Manager at Walgreens–at one point, I had 400 stores and then brought it down to 200 stores. In this role, I started working with our diversity and community business managers. One of my colleagues at the company who worked in government affairs would invite me out to certain events. Being out in the community, I realized the importance of bringing in minorities to do work at Walgreens,” she says.

“I felt it was important for people to come and see people who look like them doing work in the building.” From there, Scott understood her work was more than setting up retail locations but making the community a part of these tasks. Part of bringing in diversity and inclusion is to source and identify minority-owned vendors and suppliers qualified to do the work. She began to mentor small businesses in this area.

The Next Chapter at Starbucks

For the past two years at Starbucks, Scott enjoys her work with both the internal [employees] and external [customers] partners. When she first began at the company, it was required for all managers to receive a two-week crash course in working as a barista at a retail location.

Scott says, “I didn’t know there was so much that goes on behind-the-scenes. I went to the company’s coffee master’s class and which educated me on the role of the farmers and how having high ethical standards in sourcing our coffee beans to what they go through daily to get that bean right,” she said.

Realizing how hard the art of making coffee was, she eventually found her niche working the drive-thru during the two-week class. “I have so much respect for the baristas–they are our frontline,” she admits.

As Facility Management, Scott doesn’t have a staff who reports to her as she manages key Reserve stores and now the largest retail store soon to open in mid-November. Under the Starbucks brand, their Starbucks Reserve locations are boutique-style coffee bars focused on giving customers another level of crafted signature coffee brands, high-end pastries, and food. They have some of the best mixologists and baristas serving unique blends of roasted coffee from around the world.

Stores are styled in rustic-like furnishings and located in more affluent neighborhoods.

Scott’s responsibility is to ensure a smooth, safe, and working environment from making sure the machinery is in good condition to have a squeaky door fixed–she is the liaison between the company’s internal partners and operational maintenance. 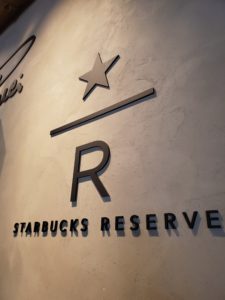 Every day, she says she is building relationships with local suppliers who she depends on to make sure the work is performed correctly–the first time. Scott says she is more execution-prone in her work history, and contract work is outsourced, she has readjusted her style of managing differently.

Does Starbucks have more minority and women-owned suppliers and vendors in its Chicago network?

Scott believes the company is ‘working to getting our numbers to where they should be.’ She says, “I’m constantly looking for diverse and qualified suppliers. I believe in the saying, ‘We’re not looking for a ‘hand-out,’ we’re looking for an opportunity.’ Starbucks is working on this, and they’ve allowed me to make sure it’s inclusive for diverse vendors.”

As a mother of two young adults–a son attending Howard University and a daughter currently attending Whitney Young High School–she is in high gear balancing her responsibility as a mother and work life. Scott explains the keys to her success over the last two decades in facility management have been based on compassion for others and staying connected to the community.

“I’m no-nonsense and an executor, but I believe in the community–I do. It’s so important.”