Herstory is Made: Chicagoans Elect Lori Lightfoot as the First Black Woman Mayor

Chicago voters has spoken as the polls came to a close—’herstory’ was made—Lori Lightfoot became the first African American woman mayor in our city’s history.  Tuesday evening supporters went to their respective candidate’s party to see the election results. Throughout the day, reports of low voter turnout were evident as a tumbleweed rolled through almost every location in predominately Black wards.

For voters who did cast their vote, the message was loud and clear—change is necessary. A repeated mantra throughout Lightfoot’s campaign since the former federal prosecutor declared her candidacy last Spring.

With 74 percent precincts reporting, Lightfoot beats Preckwinkle with 366,579 votes over her opponent’s 130,507 votes.

Her win of all 50 wards shattered they myth of the Black community of loyal and steady senior voters will have a problem with Lightfoot being openly gay and married to a white woman; the former head of the city’s police reform board; and not part of the Democratic machine. However, Lightfoot’s landslide win against Cook County Board President Toni Preckwinkle,  meant Chicago residents have a bigger priority at hand. How can she help elevate the quality of living for residents across the city? 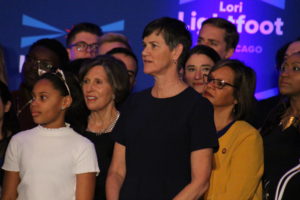 Not only was this a win for the mild-mannered native from Ohio but for the supporters who diligently hit the ground pushing the message of “Bring in the Light.” At Tuesday night’s rally, former gubernatorial running-mate, Ra Joy was joined onstage by Congresswoman Robin Kelly, Dr. Willie Wilson, Alderman David Moore, Alderman Michael Scott, Jr.; Alderman Emma Mitts along with non-violence advocates and various community stakeholders.

Lightfoot quoted the late Rev. Martin Luther King, Jr. saying, “Faith is taking the first step is when you can’t see the staircase.”

Melissa Conyers-Ervin takes home a historic win for City Treasurer becoming the first elected official from the Westside to hold a city-wide public office in over 40 years. The wife of Alderman Jason Ervin, lead with 282,404 votes over Alderman Amera Pawar with 130,507 votes.

Newcomers Jeanette Taylor and Stephanie Coleman win big.  In the 20th ward, Taylor with 4,84 votes and Coleman defeats 16th Ward Alderman Toni Foulkes following in the footsteps of her mother, pastor and former Alderman Shirley Coleman with 3,248. Both women had a strong ground game with the support of local unions and important community organizational support. 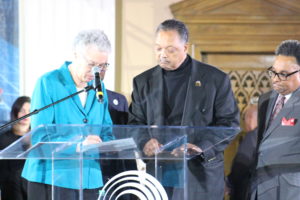 On May 20, the newly elected mayor will take her place on the fifth floor and be sworn in along with established and fresh faces representing their wards. In a city where racial tensions, redlining, and inequalities among people of color is a daily fight–African American and Hispanics will lead both the county and city-wide public offices.

Today at 11:30 am, both women, mayor-elect Lori Lightfoot and County Board President Toni Preckwinkle will join Rev. Jesse Jackson, Sr. along with public officials, business, community and grassroots leaders at Rainbow PUSH headquarters. Committing to work together, they will make a public declaration to move Chicago and Cook County in the right direction.