BEAUTY, PAIN, RISING A book review of ‘The South Side’ by Natalie Y. Moore 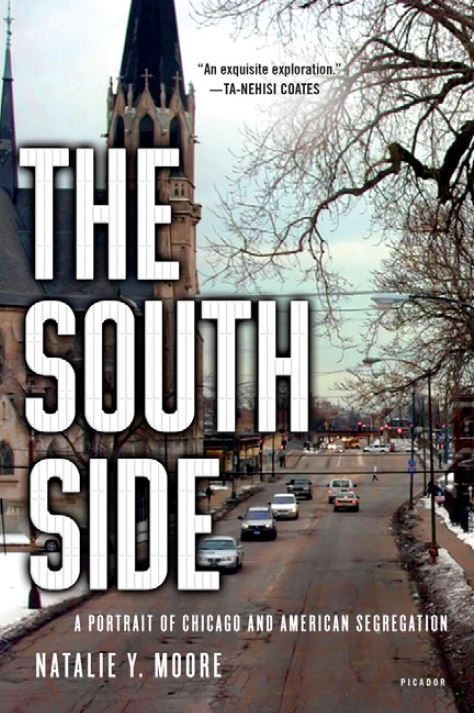 In her nonfiction book, “The South Side,” Natalie Y. Moore contextualizes the South Side, celebrates the migration that made its vibrancy, humanizes its people, and explains a myriad of realities, nuances, and histories feeding into the making of today and every tomorrow. I was drawn to the book by the cover shot of 59th street of cars headed west from State and, probably, from getting off the Dan Ryan. I was drawn to the cover, the nostalgic scene, Ta-Nehisi Coates’s praising quote printed in the sky, and I thought maybe the book was for me.

Moore begins the book, “Chicago is one of the most segregated yet diverse cities in America.” Through a mixture of interviews, legal history, analyses, personal stories, memories, and scholarly opinions, Moore defends the side of the city that media tends to scourge, that (many White) outsiders tend to fear, that institutions abuse and neglect. Instead, she explains it for the complicated place it has become, all the love, and all the magic within. Each chapter is key in painting a fuller picture about the South Side of Chicago—the price of segregation, public housing’s history, gentrification of Black neighborhoods, food deserts, media portrayals and the psychology of a Chiraq, corruption in our politics,and the black love making Chicago’s sweetness something like Abundance Bakery caramel cakes.

Moore explains the economics, writing about how it’s expensive to be on the South Side and be discriminated against. Citing Mary Pattillo’s “Black Picket Fences: Privilege and Peril Among the Black Middle Class,” Moore explains that Black middle class neighborhoods are characterized by more poverty, higher crime, worse schools and fewer services than White middle-class neighborhoods.

“Black life in Chicago is a place of loveliness and contradictions and negotiation.” Black life in Chicago is ever complex and ever influenced by everything preceding each moment. Politics play a crucial role in this too, and Black Chicago needs politicians for Black people but towing a balancing act between appealing to Blacks without being “too Black.” Moore writes about one of the most iconic mayors Chicago had, Harold Washington, who appealed to all of Chicago with a formidable thunder. She says, “Washington’s legacy looms over the City of Big Shoulders, stronger than the odor of the infamous stockyards, deeper than our famed deep-dish pizza.”

The book does an amazing job focusing on segregation on the South Side in mostly black neighborhoods, but predominantly Latinx neighborhoods surely face similar though not all the same problems. Of the breadcrumbs Moore leaves every reader to further explore segregation in Chicago, I wonder about a fuller picture that includes Latinx neighborhood histories and how everything plays into the Chicago machine.

We should all read Moore’s book for the narratives, the numbers put to facts, the studies and comparisons, and for the inspiration it gives to learn more. And I wish of all our required school in school, this was one we were assigned in order to understand the moment we’re born into and living. For, we are seldom and systematically left uneducated on these histories and issues that conceive racist and broken worlds we know.

About the Author: Andrea Bossi